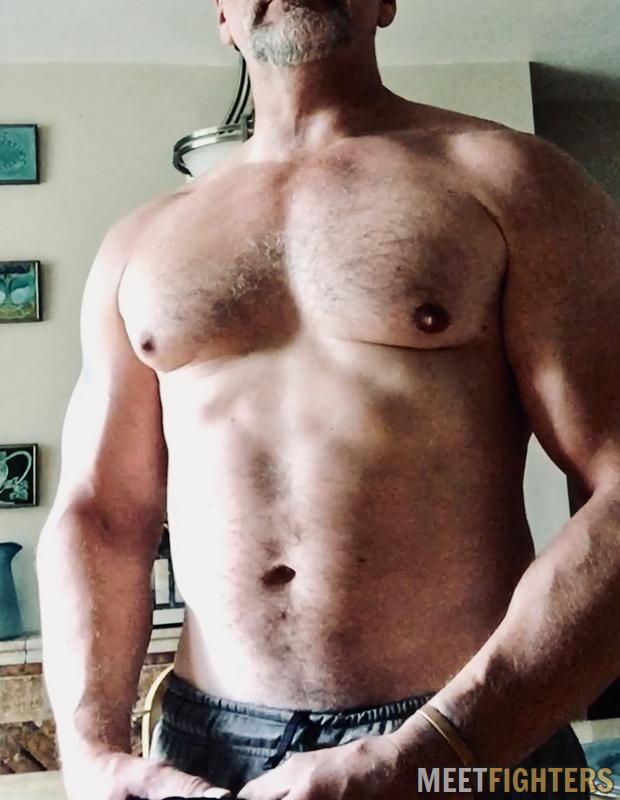 Fitbloke strikes an imposing figure from the start. His big frame and massive biceps create an intimidating feel and when we got down to the mats that was certainly true. No gentle warm up here; he was straight in before I could blink an eye. Fortunately I had a few moves of my own to make sure he suffered well. Flexing and gutpunching were definitely the bonuses and it was great we were very much on the same page. Recommended if you like it real.

Been chatting with this guy for a long long time, so it was with some trepidation that I finally met him today.
To my mind he's one of the UK big names to wrestle!
I met him at the station and we shook hands... hmmm there's a challenge in his handshake!
In person I reckon he is bigger than his photos suggest... there's some power in his shoulders! A solid wrestlers build. He also happens to be modest, polite and charming.
Strength-wise it was pretty equal and we spent a lot of time locked on to each other. I had him in a headlock several times but he had hold of me too. When I was on top I was in charge, but it was the same if not moreso when he was on top.
Get an armlock on him... that may be his weak point!!! 😈
At one point he grabbed my trapezius muscles and squeezed hard!!! I actually roared in agony... they were tight. Geeeez!!!
He likes to flaunt and flex his physique... that's another challenge I couldn't resist! My arms will be aching the rest of the day.
We also gutpunched each other... very equal. Next time we meet, that's an avenue we should explore more.
And then there's his sidescissors... wow! If he had applied that hold at the start, he'd have ruled the entire wrestle.
All in all, we were very like-minded.
This guy is the business and I thoroughly recommend you wrestle him 😎

Met fitbloke today Feb 14 2017.
6 foot 2 of muscle WOW.
Had a great wrestle and some gut punching.
Very strong and great biceps.
Despite the weight advantage I think I managed sometimes to keep this hunk of a man under control. (but not that often).
Off the mats a very nice bloke.
Looking forward to our next meet when I hope to have put more muscle on to cope with this good looking hunk of man.

Smashing chap!
With a great set-up.
A bit of a size mismatch, but he fought well.
Roleplay - he was the badguy... I figured I'd just throw him off and overpower him if I needed to. Which I did ;-)
Will meet again. I'll play the badguy next time!

Chatted to fit bloke on-line for a few days before we met, and I actual thought I stood a chance against him. How wrong was I. This man mountain dominated the match from the start. I didn't stand a chance against him, and I would not describe myself as a jobber at all.
That being said I would jump at the chance of another match against him.
He put me at ease and made me feel relaxed in his company from the start.
A really friendly (and incredibly handsome) guy.
He will tell you that he isn't that skilled. Don't you believe it. He knows some great holds and is incredibly strong.
I really hope I get another chance to meet this great wrestler again.
I recommend fitbloke to anyone that is lucky enough to meet him in the future. A really great guy.

Met this big chap at short notice and very glad I did. We have similar stats. I'm not a skilled wrestler but I was able to overpower him and get a few subs. He's great company and will look to match up again.

Had a great competitive match with this tall gym trained guy.
Good banter from the off , both out to get some taps, and our size difference balanced by me having had a few more matches.
Look forward to a tough re match one day !

A super nice guy!
Thoroughly enjoyed our meet. Geoff is another one of those guys with the right build for wrestling and he's fast too!
He has some skill. When I met him at the station I thought... Yeh I'll do this guy, but it was pretty even.
I might do some training 😈

Fitbloke is recommended by Ridge

We had planned to meet for sometime so when it finally happened there was an air of expectation and I wasn't disappointed.
With his shirt on Fitbloke looks huge, but with it off he is a monster - a powerhouse.
Built like a tank and his punches are like an express train. His abs are like steel and he has a killer smile. One of the best matched opponents i have met for size, strength, competitiveness and wit, and one of the most enjoyable fights i have had.
Consider yourself lucky if you meet this musclegod.

Ridge is recommended by Fitbloke

Ridge was a real pleasure to meet and its been on the cards for some time.
In fact I think we lost all track of time until nearly 5 hours later (!!!) when we checked the clock.
He has a superb physique and at 6'1, we were eye to eye... Nice. Surprising hairy too!
He can take it as well as give it. There were breaks but this was pretty much an intense clash between 2 equals.

We've agreed to and are planning Round2. And I'm looking forward to that!!!

Fitbloke is recommended by davey123

We wrestled a few years back and.....well this guy is one of the most awesome wrestlers I have ever come to grips with. He is very, very strong...you are warned! Has very well developed musculature and it is not just for show...as you will discover if he gets you in any of his favourite sub moves (look out for arm locks, but especially for his rear naked choke - if he is also on top of you, you are going out). And he can really dish it out if you lose control of him...you are warned again!! My recommendation is to get a good tight hold on his neck and don't let go until you have him subbed and compliant (not much chance of that, but it's nice trying).
One of the main problems is that he is so damned handsome and looks stunning that you will find it difficult to concentrate on the task. Though if you do manage to get him into a Camel with Sleeper you will have a nice long ride before he will quit. There are ways of persuading him to take it easier if you find his weakness...but I am certainly not telling what that is, you'll have to find it for yourselves (...read his profile carefully...).
A great friendly beast of a guy who knows how to best you up safely and if he is in a good mood he might let you retaliate just for the fun anyway. I wish he still loved up here cos I would be battering on his door every week for another session.
Very highly recommended indeed. If you like masculine muscle (er....is there anyone here who doesn't?) then you have found the best here. Very charming and easy-going guy off the mats, but you won't want to spend any time off the mats as soon as you see him.

davey123 is recommended by Fitbloke

It was several years ago, that I fought this guy. He has all the pro skills of an accomplished wrestler and is built like one as well... Solid, thick bodied and thick limbed all muscle... He was born to wrestle. He's also a very nice chap.
The two main things I remember - he had me in the camel clutch. He enjoys that hold!!! And the second thing is those awesome legs... Can squeeeeeze!!!
I wanna rematch 😈😈😈

Great guy!
Very big and strong so don't even think you might be able to go strength to strength with him. We had a great fight an with more technique he'll be unstoppable!
Off the mats a charming guy on them a tiger
Wholeheartedly recommended!

Being new on this site, I consider myself very fortunate to have met John at this stage.
He's skilled... And that beats strength. He's a gentleman.
I'll look to progress and then... Round 2 😈