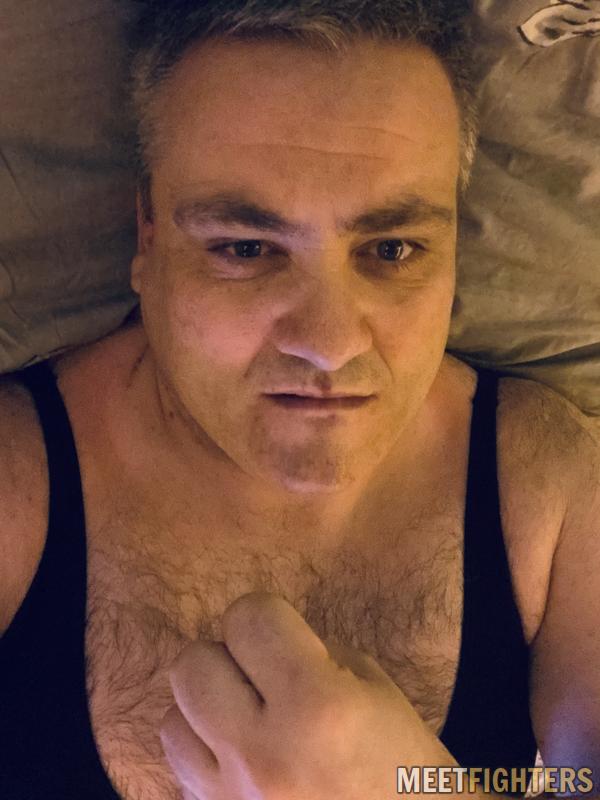 Some past opponents are not shown in the list above. Members who are blocked, suspended or on a hiatus are hidden.
Enjoy cyber wrestling? Try our brother site, ChatFighters.com!
Heavyweightbritpro has no cyber opponents.

After many years of online abuse and threats between us it was inevitable that we would meet. Despite a weight difference of more than 100 pounds I accepted the challenge to wrestle Andrew (Heavyweightbritpro) aka Goliath in his hotel in Glasgow yesterday. With trepidation, I opened the door to his room and he was standing there in his wrestling kit, arms folded ready to take me down. As I shook hands with him he assured me that he was gonna CRUSH me! Nervously I got changed into my fight kit and circled and stared down with the giant. With threats of violence, the pushing and shoving started before the bell went to start the match. I was worried that i would be no match for this Goliath. the bell went and we started to wrestle. Soon Scrapmerchant aka David had Goliath in a side headlock on the floor - the match was underway! We wrestled for a decent period of time, and despite his threats Goliath did not use his considerable weight advantage and carry out his threat to crush me. After we finished wrestling we had a blether while enjoying a beer. I had a very enjoyable afternoon with Heavyweightbritpro, he is a really nice lad despite all the trash talk. I would have no hesitation in recommending him and to meeting him again for round 2! As he says, pity we didn't meet many years ago!

After messaging each other for literally years and years, I managed to lock up with Scrapmerchant yesterday in a travelodge in Govan, Glasgow.
He looked amazing in his leotard, tights and pro boots.
What a little powerhouse he is, a real scrapper, strong and powerful!
His headlocks and head scissors were brutal, he had me tapping numerous times.
After our bout, we sat and chatted over a Budweiser. Such a lovely guy, so different to when he’s in wrestling mode.
I wish we had met years ago, thoroughly recommend Allan.
Great guy.

Heavyweightbritpro is recommended by Tanker

Heavyweightbritpto perfectly sums up this friendly,humorous, Scotsman and if your into big guys, and like to play the pro heel to his jobber HWBP's ample charms will be right up your street!
Tbh he would also make a good heel, he has a nice line in trash talk and a truly evil grin like a malevolent cartoon cat who menace humans accidently shrunk to mouse size...Or perhaps the Cowardly Lion in the Wizard of Oz!
The overall effect is quite intimidating especially when kitted out in full pro gear and boots and I was slightly taken aback by just how strong he is, had we done submission I might have had my work cut out!
As it was he happily let me work over all parts of his body, again though had it been competitive, might have struggled to lock holds on he is so big and powerful.
But safe, sane, easy to arrange a meet with. You have my recommendation big boy!
🐈
🏴󠁧󠁢󠁥󠁮󠁧󠁿 V 🏴󠁧󠁢󠁳󠁣󠁴󠁿

Tanker is recommended by Heavyweightbritpro

Lovely guy off and on the mats.
Met for a brit pro style bout.
Excellent wrestler and looked great in his singlet and boots.

Good meet up. Easy arranged and I think everyone was happy with the one sidedness of the bout.
Good one to stretch out 💪

Met Jim for a pro style bout in my hotel room.
He looks amazing in his full pro gear set up!
Strong as an ox, a completely one sided bout!
Lovely guy and easy to arrange.