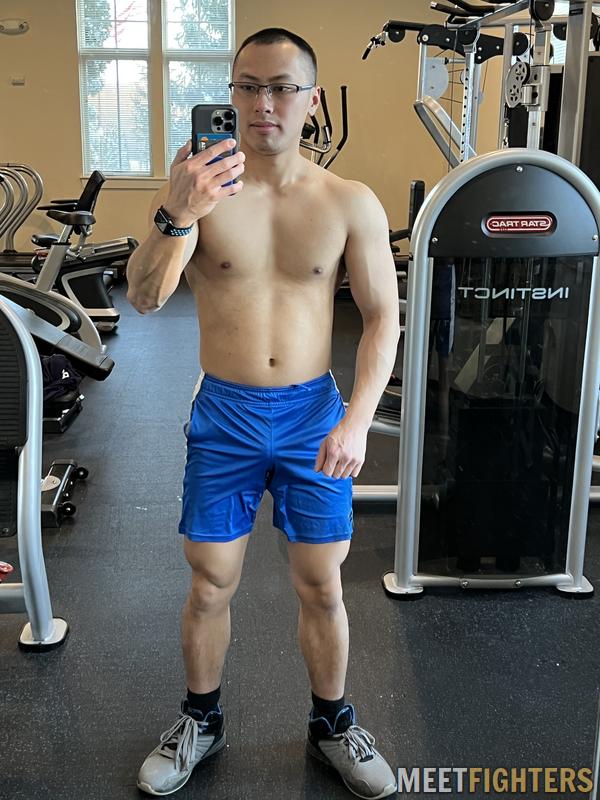 Novice into various forms of wrestling and gear. Submission and pro-style are favorites. Looking to learn, train, gain experience, and meet opponents along the way.

Fully vaccinated against COVID-19 and Monkeypox

Some past opponents are not shown in the list above. Members who are blocked, suspended or on a hiatus are hidden.
Enjoy cyber wrestling? Try our brother site, ChatFighters.com!
HondaLegend has no cyber opponents.

Total blast and looking forward to more meet ups in the future!

HondaLegend is recommended by slick

We have chatted for some time and just happened to both be in So California at the same time so we took advantage of the awesome private wrestling ring in Santa Ana. I had a great time wrestling this hot stud. His muscled bod looks great in trunks and he is plenty strong. I can vouch for all the great comments made by others in his recommendations. If you get the chance to take him on don't pass it by. Now I just have to figure out how to get some rematches with him.

He is very strong, skilled and an amazing host. Had a great time wrestling him. Was an equally poised match. We both one one round each. Then had one of the longest explosion round. Highly recommend to wrestle him. Would love to have a Round 2 and many more with this guy.

HondaLegend is recommended by WrestleJ

Nice, tight, toned body and looks great in his speedos. He’s strong, formidable and aggressive. We had a pro style match and he definitely enjoys being the heel. He’s quick and relentless. We had nonstop action during our match. Hope we can cross paths again in the future.

Update (10/21): Just had my 3rd meeting with HondaLegend and the man continues to take his training seriously. Our 1st match was early August and two months later, he’s noticeably thicker and stronger.

We started out arm wrestling where I beat him (not easily) with my dominant arm but couldn’t move him on his dominant side. (Note I am 50 lbs heavier than him and have also been strength training.)

He’s been clocking hours in the gym and sparring with much bigger opponents in the past few months and he is nothing short of formidable. Couple that with the fact he’s a wonderful, polite young man (with a KILLER bod) and you are in for a treat if you ever meet up with him.

HondaLegend is a wonderful young man and I’m happy to write this recommendation on his behalf.

He is very easy to communicate with and we were able to set up a match on the very first day that we connected. It was a great idea for us to meet for coffee prior just to ensure that our encounter would be something that would work for both of us.

Well, it not only worked, it was one of the best wrestling experiences I’ve ever had. I’m more into fantasy pro heel/Jobber squash matches. We talked about that, as well as some of the stuff that he likes: freestyle wrestling, Greco Roman and other things but he does like to be a squash jobber as well :-).

We decided That our first match it would be cool to just play around and try whatever and we wound up mostly grappling (which I don’t often do) and it was great!

This sounds cliché but he even looks better in person than his pics and has a body to die for. Very strong, very open minded and his wrestling room, “the dungeon”, is the perfect space to have a match.

Even though he gave away about 50% of his body weight to me, I had an incredible workout wrestling with this stud. The next time we meet maybe we can do more of the heel/Jobber scenarios but honestly, he really got me excited about straight on grappling and again, he is SO strong, he is game and if you are serious about meeting, he is a don’t miss appointment. :)

Heel-eo-trope is fun to wrestle with and very knowledgable with various pro-style moves. I have had the liberty to have a couple of matches with him and he has taught me several popular holds and moves done in a safe manner.

HondaLegend is recommended by pecs44

This relative newcomer is as fierce and aggressive on the mats as he is polite and soft-spoken off. Very strong arms, hands like vise grips, and a scissor to do
is from --- almost. He also has a great mat room and set-up. Looking forward to wrestling again!

I had a great Submission and Pro Match with HondaLegend ! This young and handsome stud is tough as nails. Despite outweighing him by 35 pounds he was able to pin me a few times. He’s solid muscle with abs of steel that could take any punch I threw at them. Best of all he’s a kind and personable young man whose educated and very welcoming at his home. In fact he has a room at his house specifically for matches. Very cool ! I’m looking forward to Round 2 with HondaLegend and recommend him to everyone whose in the Boston area. He should be at the top of everyone’s fight list.

As amazing as he looks in pics and a great space to wrestle. Even more importantly, he's a great person: I had a great time with him. I think he did too even if it meant getting crushed over and over. Totally recommend!