Challenge! Messages
More...
Days on the site
1049
Past Opponents
10
Recommendations
5 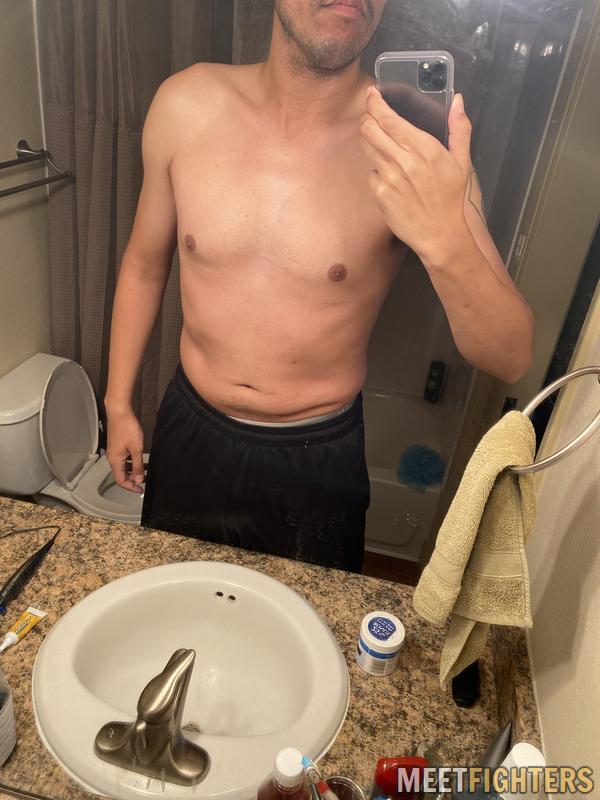 Hi, I'm into pro wrestling, play wrestling, and give and take. Love being in put into a variety of holds and moves. We can have a promission match, pro, or something more competitive. Would love to meet some fun wrestlers here. I can host in Bellevue or travel.

A friendly giant at 6'5... We had talked for a while before we finally got together and it was worth the wait. With his large size advantage Joe could have taken me down at any time but he respected my limits to ensure no injuries would occur. I was happy to get a few submissions out of him but also happy to submit to him a number of times as he let me up and made sure I was OK, yeah he beat me overall. It really was a blast to wrestle him and I recommend anyone who has the chance to wrestle him to go for it, you will have fun. Yeah, he is big and you might lose but he will make sure you both have fun, and that is all that matters. He is local and I look forward to many more matches in the future. He is easy to talk to and I enjoyed our after match conversation.

I used to think Cody W was mostly a jobber based off of his pictures. I can now say that isn’t the case at all. Cody has some good technical wrestling skills. I was really surprised how good he was at leveraging my mistakes, turning them into super tight holds that usually led to a tap. It’s hard to say who won a majority of the matches that day, but I can say with confidence that I’ve met a good wrestling partner. And he’s local too. I look forward to the next match with him.

I had a blast wrestling Joesmith. He's a really nice guy and very communicative, which helps to have a great match. We wrestled for about 2-3 hours and he has the stamina to keep on going, which I love. Even though he's really strong and has some mean legs, he kept it fun the whole time. I easily trusted him to try out some moves on me that I wouldn't let just anybody do. I think we're going to be friends and opponents for a long time. Can't wait to kick his ass again soon.....

Wrestlin is the real deal! He’s such a scrappy opponent, and he doles out punishment equal to the amount he can take. We had a great time trading holds at his hotel. Wrestlin is a tough guy, and he put me in some seriously tight holds during our match. Do not underestimate this man or he will own you.

Overall, I’m grateful I got to meet Wrestlin. He’s a really chill dude and we share many of the same interests, which is great. I feel like I’ve known him for years. Cant wait for our rematch when he’s back in town.

Update: We had a rematch during Memorial day weekend. It was also quite excellent. Can’t recommend Wrestlin enough.

He is one tough wrestler, and can apply serious moves with little effort. I was giving up a huge size advantage and just couldn't do much of anything (unless he let me!). He's a really nice guy too, and we had lots of good conversation before and after the match. I look forward to another match sometime, but not sure the result will be much different. Too tall and too strong...

TJhockey81 is a really great guy and a fun jobber to wrestle with. He let me take my time as I put him in back-to-back pro and submission holds. He can take many moves well and even let me piledrive him a few times, too. Watch out though! While he’s more of a jobber, he has really strong legs. I made the mistake of teaching him how to apply a headscissor and he didn’t hold back.. Don’t underestimate his strength. We grabbed some lunch before the match and he’s a really easy guy to talk to, as well.

After a few months of talking, Joesmith was awesome enough to fly out to Sacramento for a weekend of wrestling, and wow! What an amazing match and person this guy is. Was excited to be his first match here on the site, and definitely stood out as another one of my all time favorite matches. On the mats, this guy was way more of a beast than I anticipated. Very strong and really made me work for any taps, and even though his leg scissors couldn't make me tap they still did some damage and were quite deadly. Also was hilarious to squeeze him in my scissor hold till he farted 😅 (of course he got me back lol). On the pro side, this guy is super strong and was not only knowledgeable but very safe with the moves he did. Off the mats (and very much on as well), a very sweet, intelligent and awesome guy to talk and hang out with, as well as share many laughs with. Glad I got the pleasure of meeting him and getting to roll with him 3 days in a row, and can't wait for hopefully many rematches. Highly recommend this guy, won't be disappointed!

GSP is a fantastic wrestler. He’s got an incredible body and one of the tightest scissorholds I’ve ever felt. We rolled around for a full weekend. I’m grateful that he isn’t a sore winner and, in the end, he even let put him in some pro holds. He’s an incredibly handsome dude, and a great guy to talk to. Believe the hype. GSP is a worthy opponent.

Super down to earth and has one hell of a headscissors, enjoyed a great day rolling around. Can't wait till next time

Pullman’s choke holds are no joke. He’s a master but he also knows how to play safe. He’s really strong and squashed me with his tight holds. He’s super cool outside of wrestling. We had a great afternoon hanging out.