Challenge! Messages
More...
Days on the site
3032
Past Opponents
13
Recommendations
7 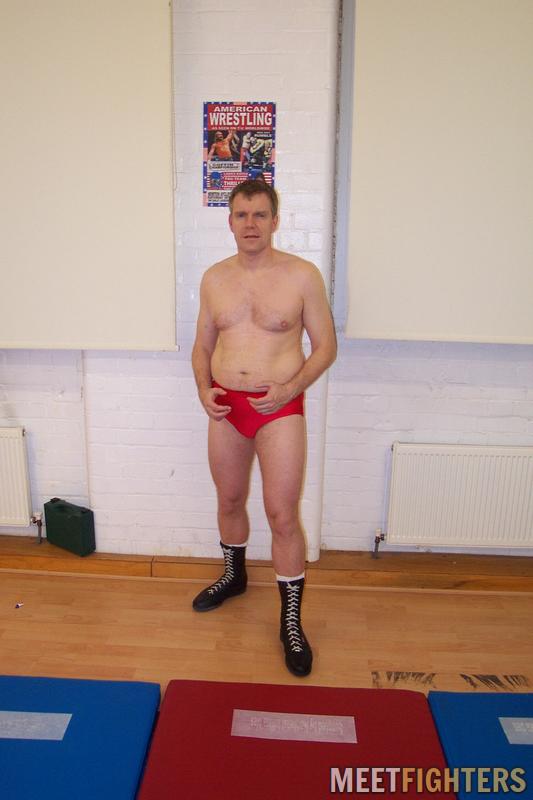 I am willing to travel 300 miles

Lifelong professional wrestling enthusiast. I am looking to meet guys who want to wrestle pro style in trunks and boots. I am easy-going when it comes to opponents - all I really look for is the same genuine interest in pro wrestling.

A true gentleman!
We had a lovely, fun, playful Pro style match with lots of exchanging holds, and Londonfightfan knows some good pro holds!
He is a real wrestling fan and a lovely guy off the mats too and very easy to chat with.
The whole evening was a real pleasure and I look forward to the next opportunity to meet!

I had a really good evening of wrestling with Paul. He is very friendly and provides great company and conversation. We had a great back-and-forth Brit Pro-inspired wrestling match in the Grove Park ring, which was a lot of fun. I am looking forward to the next match. Highly recommended.

Had a light brit pro style match with Londonfightfan trading holds. Really pleasant guy, easy to chat to and completely reliable. Enjoyed the meet and can highly recommend.

I had a good pro-style encounter with Johnny in the Walthamstow ring, trading holds back and forth, and plenty of postings (for me!). He is a friendly guy and good company in and out of the ring.

Londonfightfan is recommended by boston kid

Ian is a great wrestler. He knows the moves and like me loves them! He can dish them out or take them. He's also into the gear and making the session fun.

Off the mat he's an intelligent likeable man so
conversation flows easily. Also we could talk about wrestling eg world of sport etc as he's been as obsessed as me for years!

Definitely someone to recommend 😀

boston kid is recommended by Londonfightfan

I had a really enjoyable time with Mike - he is a gentleman in every respect, and offers great conversation. On the mats he is a wrestling demon, with a nice line in punishing holds and verbal taunts. I had a great time on and off the mats and thoroughly recommend the experience.

I MET LONDONFIGHTFAN IN OCTOBER 13 AT TRAVEL LODGE FOR A LONG PRIVATE ONE TO ONE PRO WRESTLING CHALLENGE.HE WAS A GREAT WRESTLER IN HIS PRO WRESTLING TRUNKS AND PUT UP A GOOD FIGHT.THINK WE WERE BOTH EVEN.LOTS OF STRENGH TESTS AND LONG HELD HOLDS .WAITING FOR BOUT 2 .BRING IT ON IAN.

I met Scott in a hotel in west London and had a thoroughly enjoyable time. He is (like me) a keen fan of the World of Sport wrestling that we grew up watching and enjoys the ritual of wearing ring jacket, proper trunks, etc. We had a good, hard-fought wrestling match within the confines of the hotel room. I look forward to setting a date for a re-match.

We met last night and had a great time at the Barnet mat room. A real tough fighter on the mats, driving home his grappling skills at every opportunity. Relentless style and excellent with the verbal intimidation. We had a great conversation afterwards over a few beers and I hope we shall arrange a repeat match soon. I need to avenge my loss last night!

I had the pleasure of taking on Ian during my most recent UK visit. He had a lot going on in his life but still made the time to meet up with me. He looks great in his gear and he definitely gets the whole wrestling vibe, especially the pro style. My hotel room had its definite limitations but I still had a very enjoyable time against him. He's a very personable and interesting guy off the mats too! Highly recommended.

Had the pleasure of wrestling Ian at Hackney. A resiliant and quick wrestler who is more pro than sub. Good company off and on the mats. Highly recommended.

Had a great time with Ed at the Hackney matroom. He's a strong, skilled submissions wrestler who taught me a few grappling skills and techniques while we wrestled. And very good company off the mats too. Highly recommended.

Londonfightfan is recommended by Rick Royal

I had the pleasure of meeting , and , wrestling Ian in November @ the Hackney matroom.
We had 3 hours of fantastic pro wrestling , and , i certainly hope for a re-match in 2012 !!
Londonfightfan is everything that he says he is , but , i can add that he is curteous , and , a lovely sociable guy.
After the wrestling bout , we enjoyed a few pints in a proper London pub !
The guy is a superb pro wrestler , looks fantastic in trunks n boots.
Conversation flowed easily with Ian until, he mentioned that he was a Motorhead fan !
I have to confess , i thought that i knew most world of sport wrestlers , but that was a new name on me !
If you get the opportunity to meet and wrestle Londonfightfan - Take it !!
Ok Ian , now that i have given you a glowing recommendation - thats 2 pints of London Pride that you owe me !!

Rick Royal is recommended by Londonfightfan

Rick Royal (or Paul) is a great guy, and I recently had a thoroughly enjoyable three hours of wrestling with him. He knows his holds and moves, and plays the heel perfectly. The wrestling was a lot of fun and Paul and I had a good conversation down the pub afterwards. He is a skilled wrestler and a genuine, friendly guy. I am looking forward to wrestling Paul again soon.