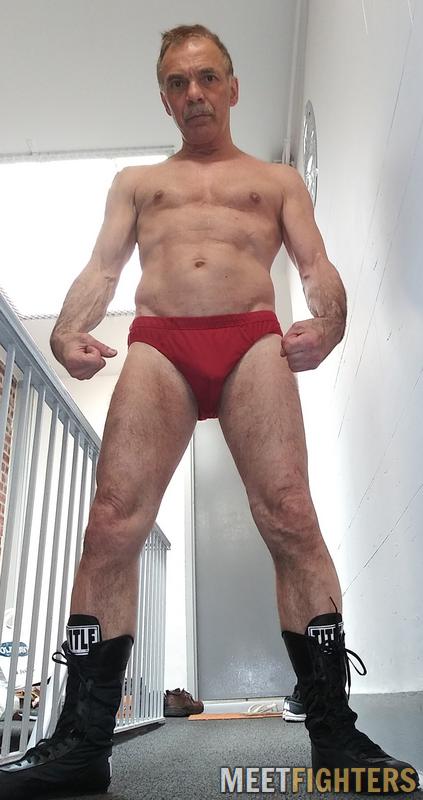 I am applauding this tough guy who took me in wrestling battle. I felt very well his hard muscles when he did technical wrestling movements and constantly pushed to take control with proper seasoning with aggression. I just wish he would be a little bit bigger. I enjoyed very much our wrestling session with bayridgefighter and I will definitely do it again next time i am in area. In addition, he is good host, reliable person and he offers pretty decent wrestling space with mats that is not often can be found in NYC area.
For those who can not take a trip from Manhattan to Brooklyn because "too much traffic", I can say that excuses only highlight the luck of commitment to real wrestling match. We did it from Lincoln Tunnel/NJ side pretty easy during Friday night traffic + just before that I had red-eye cross country trip. If you want wrestle - you will find way how to make it happen. Bayridgefighter, definitely a guy who will!

Let me warn you this guy is a serious Grappler..don't attempt to wrestle him with a half-baked workout beforehand.
On November 17th l met Nick this very handsome man thanks to the suggestion from Frank aka SISuperman who originally asked me if they can use my 10 by 11 foot mats at my house in Bay Ridge, Brooklyn and invite 15-20 guys to wrestle round-robin style with Nick. I at first was hesitant later said fine let's go for it..We worked for 5 days to invite guys to come over on the 17th..Sad for them for not coming and missing out on a great opportunity to with this very skilled fighter. At first I was intimidated by his well proportioned size of 6-1 and I'm being 5'6"..But when we strip down, me in our speedos and he in compression shorts.. Then seeing his fantastic well developed abs, I said I'm not going to be intimidated is handsome smile and confident attitude..l said to myself I want to hit the mats with hot man. We wrestled for approximately two hours that ended up i a few submissions. Nick brought with him a banquet and he was prepared to dish it out luckily or sadly I was the only recipient of his generous servings of his punishment. Yes a full banquet he brought of various combat skills from from Judo, karate, bjj, lite MMA fighting to accentuate his well practiced submission holds on me.. and with those forearm held tight against my Adam's apple I was afraid of losing my wind so tap out five or six times.. Along with Judo Style hip flip overs of me. Luckily I didn't feel any pain after dropping me in those flips crashing on my one inch thick mats.. "Like a sack of potatoes? Sean? I'll remember that bro.Grrrrrrrrrr, I'm going to tear off your loincloth and whip your ass!!!.. in all respects and love for Nick l really every minute fighting him. Even if they're calling it a night I recouped and said let's go at it again for a little more action on the mat and we did

thank you Nick for your patience.. Anybody who think you can handle this fighter will get more than you bargained for. For he's quick, alert and combines many different fighting skills you'll have to watch for them scissors and Nelson period for me I could only handle either his legs or his arms but not at the same time. I felt like he was an octopus all over me. In so many words Nick said "I gave him a good run" or in this case a good fight for his money considering my size..Auh only thing I miss out on was getting to his abs with my fists 👊 and feeling that resistance. I wish he would have tried my abs👊
.auh.... I need more firming up. Oh he also said If I was only closer to his size and weight and in proportionate strength.. I would probably have been just as powerful resilient a fighter as he
And would have given him some good competition. I asked him if he'll come back, he said we'll definitely wrestle again. I told him" you'll be back but I'll be stronger " It was a great experience getting down with this super friendly and considerate fellow Grappler.. so the next time Nick rumbles into your town don't turn them down! . so don't miss out meeting this fine humane but vigorous fighter.. again thank you Frank for helping to set this up and thank you Nick for hitting the match with me all the best to you 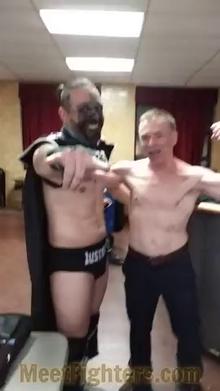 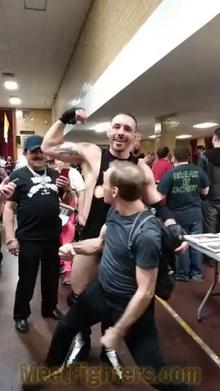 At Warriors of Wrestling matches in Brooklyn May 2019. Chumming with Just Neph 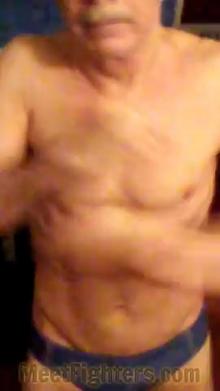