Challenge! Messages
More...
Days on the site
2947
Past Opponents
24
Recommendations
5

Into fun,playful,lite wrestling, lifts and carrys, wrestle to pin downs pins and escapes!

sportsri is recommended by cake

Sportri is a very nice man, Handsome and very well built ! He is very strong too ! I had a great match with him. He out muscled me and won the match ! Even though I lost , i had a fun time of it ! I need some rematches with him ! :)

cake is recommended by AZ85258

It had been awhile since Cake and I last locked up. Fun as usual, good work out, kept me on my toes (or back). Still as solid as before with a good muscular build - has the body of a 30 year old.

AZ85258 is recommended by cake

Had a match with AZ85258 when we were both out in Palm Springs Ca. It had been a while since we last met up ! I was Surprised and Impressed with the muscle he has packed on his upper body , his pecs and shoulders and traps are rock solid ! He is bigger than the last time we wrestled around ! He has gotten stronger too ! He's like a tiger , quick and strong ! I had a fun time with him ! He knows what's he is doing ,when wrestling around ! I think I'm going to have to workout harder at the gym to best him next time ! Grin !

cake is recommended by Italwrestler

Cake is a really great guy and tough wrestler! He's very strong and quick for his size and age! We haven't wrestled since he moved to Chicago, but we had a great match and I enjoyed wrestling with him very much. I look forward to another match in the future and consider him a friend! He's a great guy and very competitive. If you are in his area, definitely give him a shout out. You won't regret it!

Italwrestler is recommended by cake

Italwrestler is very good wrestler ! Fun and Skilled and Strong ! He's also a Very Nice Man ! looking forward to some rematches with him ! :)

cake is recommended by hotprofanmuscle

Always a great time with Cake - he is in great shape - fun to wrestle, strong and makes you work - bankable, quality good guy
don't miss if you are in Chicagoland

hotprofanmuscle is recommended by cake

Have met up and wrestled around with hotprofanmuscle over the years ! Just had a rematch with him here in Chicago ! He really is Freakishly Strong ! He easily lifted me in all kinds of lifts and over powered me at wrestling again ! He still is Super Strong ! Can't wait for more rematches ! Maybe someday I'll be able to best him ! LOL

RuffTuffTouch is recommended by cake

This guy is one tough ,fun guy to muscle around with ! He is very strong !
He's a really nice man to hang out with as well ! rematches are needed !

cake is recommended by Txwresl

Nice guy, good wrestler, hard as rock body, fun off the mat as well. Was a very long time trying to meet, but it was worth the wait...hopefully next match will be much sooner!

Txwresl is recommended by cake

Had a really nice and fun time wrestling Txwresl ! He's fun and fit ,nice build on him ! Super nice man on and off the mats ! Rematch is needed !

cake is recommended by Dogfighter5

Dogfighter5 is recommended by cake

This Man has an amazing muscled build on him ! Fun to wrestle around with and He is a Good Guy ! 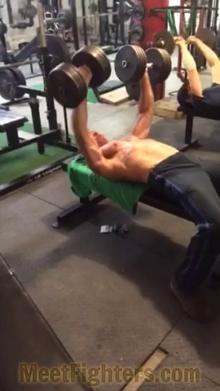 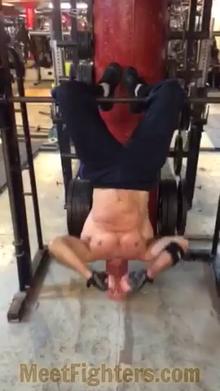 Part of my Ab workout !

Keeping fit to wrestle around ! :)