Challenge! Messages
More...
Days on the site
2345
Past Opponents
18
Recommendations
9 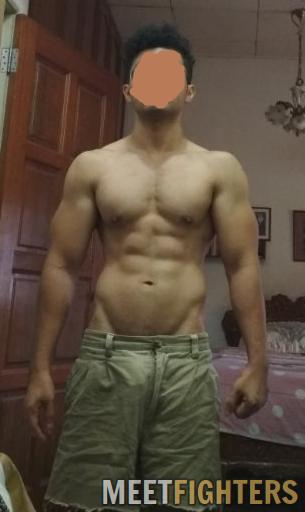 Im mostly interested in competitive matches, submission. Interested in with various martial arts. I'm into practice moves, trading holds and test of strength. But I'm not into role playing (Jobber and Heels). And I cant host.

Do reach me if you want a competitive fight.

So I invited fighterff after a space becomes available since one of my earlier match feared that he could not make it, but then the dude somehow managed to turn up in the end.

I was tired after the match with the other dude so I decided to change my match with fighterff to a hangout session by the pool instead. He was cool with it so off we went to the infinity pool.

After seeing how impressive he look, I couldn't resist myself to sneak in a few rounds. Even though I was tired, it was totally worth it.

Totally recommended to someone who wants a challenge. :)

A match worth waiting although only at a short period of time. Fast and strong wrestler, well built body and a gentleman guy. We hang out and at the infinity pool in his hotel and managed to wrestle a couple sessions. Looking forward to wrestle him again. Highly recommended!

I wrestled him when he was still a newbie. Even at that time he was already feisty, energetic and willing to learn. Glad to see that he has gained more experience.

Once I saw fighterff stepping in, I immediately know that it'll be a tough match. This guy has a good upper body: nice chest, solid biceps, built shoulder & back, a fantastic body that everyone admires.
As expected, it was a long & intense battle. He was very strong & gave me a lot of headlocks, but I managed to escape all & returned him the same. As the battle became more intense, we decided to go for the oil match to make it more challenging.
The oil match in fact making our battle more intense & more difficult, there were a lot of escape & both of us were just exhausting our energy trying to make all unsuccessful locks. Our frustration making the fight to a even more fierce level. The oil match has last for almost an hour & it exhausted both of us. We decided to conclude it as a draw as none of us can continue. We need a rematch to conclude the winner. It was a good fight.
Don't hesitate to fight him while you are in Kuala Lumpur. I have to wait for our rematch to see who is the better fighter.

Wrestle match with Alan is the match i have always looking for, a competitive, intense, sweaty, energy drained match. We wrestle with no intention of losing, applying and breaking each other holds and locks. Oil and sweat were mixed. Trying very hard to make each other taps. During the match, our script is "I am exhausted!" replied by "so do I!" but we kept wrestling until both of us flat and decided for a draw. Besides having a fit lean musclebody, his bjj skills and great sportmanship attitude are definitely a plus. Definitely gonna have a rematch every time our path crosses.

fighterff is recommended by Links07

To begin, fighterff is crazy hot.
This mighty mouse with muscles exploding everywhere clearly likes the gym.
When wrestling with fighterff, know that he’s very strong and very competitive. Those expecting a give and take session will be disappointed. He came to our session with only one objective in mind – to dominate and to destroy. I could barely stand straight just an hour into the match.
Off the mats, he’s a complete charmer, good looking, friendly and sexy. This strongman represents the best of Malaysia and I’m glad to have met another friend here in MF. But I may have to take a hiatus from wrestling after a session with him. I’d like to be able to bend my arm again :)

Links07 is recommended by fighterff

Link has almost the same stats as i am, weight and height thus our match was fair. This nice built chest and lean figure guy put a great match to fight me back after many taps. A great fighter! Hope he will return to fight me again in the future. Beside that, Link is a good looking and sexy guy especially when he is in his formal coat. Cant believe we chatted an hour in the first and almost forgot came to wrestle him. Most Recommended (:

ichigo is recommended by fighterff

Well built and ripped. He packs with true hard muscles on his chest and definitely his biceps. I'm not kidding. Just need more practice on techniques will make him a fierce opponent. Off the mat, hot good looking guy with great personality and a friend you can go drink mamak with

Wow ! Strong , muscled, full of energy ! One of the most exhausting match you can have I KL I think ! Great competitive wrestling where trying to submit him needs a nuclear energy ! Highly recommended if you want a real challenge !
Off the mats , smart and very friendly

The match was intense! lot of sweating and both sides wont submit easily. We had a one-on-one match together. Me and my friend versus him and his friend. Havent decided the winner yet.. i think we should meet again! (we can do tagteam too)- off mat he is smart and talented guy. I amaze he can speak many languages. a great guy to hang out with.

Hot guy - was able to give me the crush/fight I desire. Great body and given time constraints our fight soon turned into a mutal muscle worship session, with some gut punching and a lot of cock fighting. Very strong, great bicpeps and good selection of gear We did suits and posers/thongs. My pecs were also well tortured!

Hot match. Even though the match was short but we had great time wrestle. He is strong, muscular and have a nice man bun on the head. We started with arm wrestled see who the strongest and straight to wrestle. He do competitive matches too. Great guy. Highly recommended.

Fighterff is in great shape, quite strong, and very competitive! We had a fun match in which he showed me the moves he knew, and how to apply them with force! I taught him a few other holds he can add to his arsenal! He may be small in size, but makes up for it, in spades, with his strength and competitive attitude!. He makes for a tough opponent, on the mats!

He has a wide knowledge on groundwork. A mentor and a friend. would definitely recommend him if he come and visit your place. Dont let his age fool you because he definitely has the skills and strength!

Short little muscle guy with big biceps. Competitive. Attacks you like a pitbull but runs out of air after some time. I hope he will do some cardio, then he will become the welterweight champion on meetfighters. Friendly guy. I hope we can meet again.

I would say, i am crazy to have a match with a man who has all advantage in height, weight, and skills. He is very competitive but he knows where my limit . And above all, we were wrestling so many times until we both were tired (especially me) but we still wrestling. That was a new experience to me! I am pump to train my cardio and strenght training so there will a even match next time we meet. Did i mention he is a very nice guy?

fighterff is recommended by tapout

Gym trained, aggressive and nice fellow. Willing to work on air and techniques. And if you feel tired after a match, ask for a muscle relief massage ;-)

tapout is recommended by fighterff

A great guy who practices submission frequently. I have a sore neck waking up after a frequent headlock by him. A great guy as a person and as a fighter. Recommended to fight him!