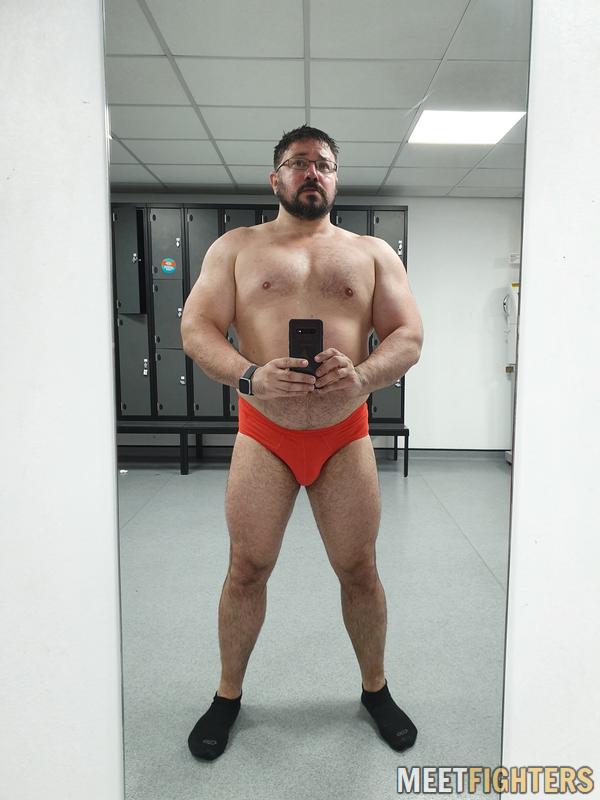 I am willing to travel 1000 kilometers

French stocky guy, with judo background, I love to play wrestle, judo with other men

stockyfr is recommended by Physical

Great guy, what a powerhouse!!!, his physique is bloody impressive, his strength is too. Thoroughly enjoyed our time on the mats, I was gonna put "roll on the mats" but actually it was more of a static immobilisation! We were both determined to overpower the other and it ended up a bit of a stalemate, I'd say totally evenly matched.
If you want a challenge in strength and power, meet this guy, you won't be disappointed. Totally recommended, safe and sane and a gentleman (I said "gentleman" - not "gentle" - be confused at your peril!)

When Stockyfr arrived at a group meet I quickly realised it was not a case of whether he'd beat me but more how quickly! Still I gave it my best shot and was able to defend for a while until the inevitable happened! Very pleasent, sensible and personable guy, and I hope he'll give me another shot at him.

stockyfr is recommended by Muscle Monkey

Met this guy as part of a group meet. Very nice guy, friendly. Hes strong and has excellent stamina. Skilled and doesnt give up. Glad i had the chance to wresrle him. Would definitely do round 2.

This guy was a pleasure to meet, excellent stocky build and some great strength too! Brilliant arm wrestle and tests of strength, genuinely nice guy who is stronger than most. We had a good wrestle and even managed to incorporate some body punching and knees! Solid wrestler, although he knows who's boss haha ;) Thanks for hosting mate, absolute pleasure and I'd recommend him to anyone. Thanks again :P

I wrestled this fantastic bloke in Manchester. He is a real powerhouse, much larger than what his pictures let believe. off the mat, he is great guy, a smiling face nice and respectful. On the mats, he is one of the strongest guys i've wrestled, knowing what to do in a match. We had a long session of ground wrestling and some tests of strength. I cant wait to lock up and wrestle him again.

Simply one of the best! I think I was the first to face this AMAZING guy at a meet in Manchester! Awesome skills, able to adjust to make the fight enjoyable. Great physique to match his skills. Off the mats he brings French charm and a winning smile!! What more can you ask? 100% PLATINUM STAR!! Don't miss a chance to roll with this superb wrestler!

I was very shocked when i wrestle this french beast because i didnt imagine he would be so strong and skilled in fact i was thinking to give him a beaten and happened just tha back. He was very kind visiting my place to wrestle me. In the mat we started armwrestling and i was not able to believe how much strong his arms were like a solid wall, imposible to bend...there are not may guys able to beat me armwrestling. Then when we wrestle he beat me few times too till a shoulder paind avoided him keeping wrestling (perhaps and strategy when he felt the match was turning back? lol). But i enjoyed each second of our match. We must repeat to find out it exactly... out of the mat he is a 10/10

stockyfr is recommended by j2047

I had a lot of fun rolling with this "monsieur";big and strong with tons of stamina!
It was a pleasure to feel is power and.... try to bring him in trouble.
Uncomplicated and reliable guy!

j2047 is recommended by stockyfr

He is been a wonderful host in Zurich. On the mats, he is strong and put all his energy in trying to win, making him a redoutable opponent. Cant wait to wrestle him again

When I met stockyfr in Zurich I said to myself I will never make with this massive guy. Instead I had a safe and nice match. This guy has a judo background and knows eventually the safety limits for his action.
Hopefully a new match in the future.

I have a couple of bouts with docmoose. he is a strong and skilled opponent. i'm sure i'm gonna meet him again for some other matches.

You might call me crazy, but after wrestling Celticmuscle in the morning I booked an evening match with Stockyfr, a past opponent of the Champ. We started the match with no hesitation and locked all the possible holds we could on each other. The match went very well, Stockyfr is very muscular and strong, making the wrestling an enjoyable meeting. Despite of his efforts and even a classic test of strengths, this handsome wrestler found himself under my power. After the match we headed towards Temple Bar in search for the Irish culinary achievements. Instead of sandwitches and chips we did actually find an Italian pizzeria, and got ourselves a good meal and wine!

I feel that I got a new friend in Stockyfr and welcome a rematch with him. If you like a strong and experienced wrestler, he is on top of the list in Dublin! Highly recommended!

Wrestled with this hunk in Dublin and it was one of my best wrestling match. he is muscled and strong. he is also a fantastic guy i enjoyed to spend time with on the mats and outside.

stockyfr is recommended by stuttgart grappling

Had the fortune of wrestling Stockyfr. He is one strong and skilled wrestler who taught me a thing or two about wrestling. Great guy to meet and wrestle and a top fella, a great guy and a gentleman on the mats.

Enjoyed meeting this judo guy for a great wrestling match. Great casual personality too. Now that he has moved to Ireland, hopefully we get to roll again

This man is one strong tough judoka! Determined, controlled aggression mixed with real skills makes for quite a combination. Add in a great personality and u have a great opponent! Meet him if u can!!

stockyfr is recommended by fr judoka