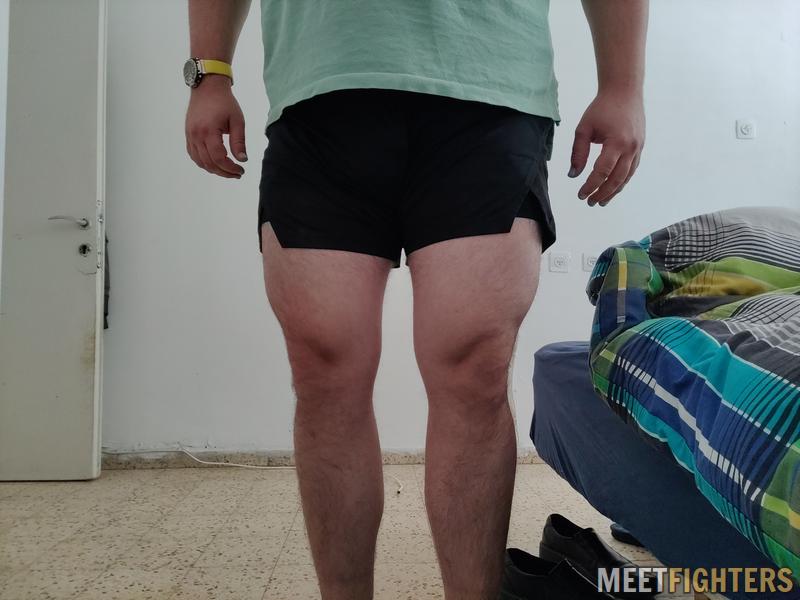 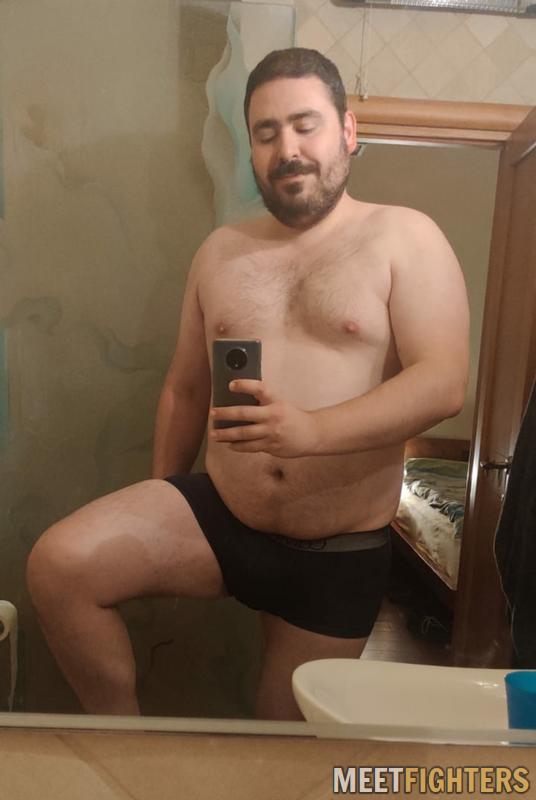 Outside of the matches, I'm a nerdy easy going guy, would like to meet new and interesting people. Love to leverage my size to humiliate my opponents (only mutual things). Always excited on testing my quads' squeezing strength on my opponents. Think you're up for it?

Here to have fun, and that can only happen when you're having fun as well :)

And when I say big - i mean it. Zivolo is a very strong and tough guy. He is so powerful that when he puts his arm around your neck (or actually any part of your body), you will not be able to move it even 1 cm. Zivolo knows how to use his power and and enjoys doing that. His quads are enormousand marble strong, and when he gets into scissors action - you better tap quickly. He respect the rules and although he is a tough heel with a "vicious streak " he wrestles in a very safe way.

But the most amazing thing about Zivolo is his personality - He is an awesome guy, multi-talented, smart, exceedingly friendly, polite, charming, trustworthy, kind and a true gentleman. He is a fantastic classical piano player, and it was exceptionaly wonderful to play the piano together after we tried to crush each other :-)

It was a immensly joyful experience, in all aspects and I most definitely recommend meeting this awesome guy. Thank you Zivolo for the delight and the amusement

This recommendation is long over-due, and I have no good excuse to why I procrastinated such an important feedback to be written.
It's hard to encapsulate all the traits and attributes this man possess. Wrestler on was more than just a fantastic opponent; he's intelligent, he's sweet, he's friendly, he's an amazing host, he's a jaw-droppingly good jazz piano player, and (oh boy) he's strong as hell.

It's rare for me to experience the feeling of being tossed in the air by the springing of quads that can manage such a feat. Yet Wrestlron was the one to put me in that very experience, making me fly in the air while I was vainly trying to put him in a Boston Crab.

I had a terrific time with this beast, the match was sweaty and intense, for both sides. We managed to put each other in a wide range of very unpleasant and long holds. The hospitality he provided was top notch, having a large space for mats, we were able to roll around freely, not caring for the environment around us.

One of his tactics is to make you believe he's not as strong as he looks, and that he's not in the shape that he was… you'd be wrong to trust any of those claims. He is stronger than he looks, he's in a shape that would make young people wish they were him.

Bottom line - I can't wait for the next match simple as that.

zivolo is recommended by Aldor

What an amazing guy!... despite not having much experience he is a formidable opponent. The fights with him are intense and challenging even to one much more experienced. Off the mats he is a great guy to talk with: he is funny and very intelligent, keeping the conversation going with ease. Overall, I had a wonderful meeting and I highly reccomand meeting this fighter

Aldor is recommended by zivolo

Meeting Aldor for the first time, one would assume that he's about to meet a machine made for destruction. Though that might be true to some degree, when you first meet with Aldor, the first thing you notice is how sweet and humble the guy is.
He's very fun to talk to, can be kind of a smartass and funny, overall a very pleasant, knowledgeable and cute person.
That being said, on the mats he is a combination of that relaxed and funny guy, yet you immediately start to notice how easily he can deflect everything you throw at him. If you trigger him enough, he can come after you, and that's when you should get really scared :) his skill in martial arts is phenomenal, his strength is brutal and his attitude is the perfect one to put you in your place and enjoy being beaten down to a pulp by him. However, being the humble guy that he is, Aldor didn't shy away from letting me have my fun with him, making him endure my crushing headscissors, bearhugs, camel clutch and a nice Boston Crab.
There is tons more I can write about the guy, but I'm afraid my writing skills won't do him justice, so I think it's wiser to leave you, the spectator of this review, to experience what I had and see for yourself what I mean (and fill the blanks yourself ;) ).
If I wasn't clear enough, Aldor is HIGHLY recommend.

Some1 is recommended by zivolo

Some1 is one of the nicest guys I've met on the site. I had such a great time meeting with him, and of course, wrestling him as well.
Some1 is a tough opponent, his skill and power are noticeable from the start, made me break a sweat quite early. Even though he kicked my ass, he is super considerate, always making sure not to harm or hurt me (and vice versa of course), which made the match even more fun and enjoyable for me.
Between rounds, we had a nice talk and he's a very cheery guy. All in all, I'd definitely want to meet with him again, had a great time and still have the appetite for much much more :)
Betwee

yoni1 is recommended by zivolo

Had a fantastic time with Yoni! Although smaller than me in size, Yoni sealed my calculated assumption that experience and technique is mightier than raw strength. Yoni is a great fighter, he managed to get the better of me in every turn, and I enjoyed every minute of it. He is agile, strong and tough, and made it look easy for him to get the best of me. Between rounds we chatted and had a great time, I had the benefit to learn from his experience regarding strategy and holds.
He is truly the fighter you're looking for if you're into a competitive yet fun and easy sports match. I would definitely want to meet him again, and I highly recommend the same for others who are into pure fun submission wrestling.

strong abs2 is recommended by zivolo

What a delight I had, this guy truly possess a brick wall for abs. These abs truly are (almost) unbreakable, but it's hard not to also get distracted by his huge pecs which deserve a good punching as well as he bounces them in my face.
Of the mats (there was no mat actually this time haha) a great guy to talk to, we talked quite a lot on the side while enjoying some good coffee. Very sweet and gentle, makes the gut-punching part feel like a mutual dance :)
I definitely gonna meet with him again, I ain't nearly done with those abs haha. If you're into giving gut-punches, he will endure what you deliver.

to meet ziv was a great pleasure his nice guy was very strong with a lot of power in his hands and legs' learn very fast' and can pin u in many different ways. but the most of his power it his smile ' he very friendly' 'very talent \ and it was great to spend with him some time after the match really hope to meet him again

Meeting Tuvia was a delight! This man is huge and strong as he is gentle and sweet. He instantly made me feel right at home from the moment I walked through the door, where shortly afterwards we already began to wrestle each other with much enthusiasm.
Tuvia is not only strong, but very experienced and he got the hold of me in almost all of the rounds. He was even gracious enough to teach me a few holds and tips to improve my fighting with future opponents. Off the mat we had a great time and we truly got to know each other, a very interesting and intelligent person.
Would definitely meet with him again, and hopefully win more rounds this time :)

Had a great match with this huge (but very cute) Bigfoot. His size and weight definitely make up for the fact that he is a newcomer to the fighting scene. Due to work issues, we had a short but very intense and sweaty fight, testing each other's strength and stamina. All safe, sane and playful. As intimidating as his size may seem, off the mat he is a charming human being, very interesting and highly educated. Don't hesitate to meet this bull if you can.

Had a great time with tlvalor. This guy is no joke, he is big, muscular, strong, massive and an expert in fighting. I was worried a bit at the beginning, cause this is a guy you know who can go to the extreme if you'd want him to. However, once we've met, I found out how communicative and gentle he can be. Our fight was a bit short due to time constraints, but it was intense, fun and exciting. He was even willing to teach me a few basics.
Overall, he is a very sweet guy, fun to talk to and very knowledgeable. Highly recommended, especially if you're the one who is looking to be beaten to a pulp, he will deliver, he will destroy you! :)

zivolo is recommended by Vice

What a great night! There are a few good things and just one big bad one I can say about Ziv. He's built like an ox. Big, strong smart on the mat and incredibly sexy. He's a newbie and I managed to take maximum advantage of that fact.... which leads me to the one bad thing and that is, he ain't gonna stay a newbie for a very long time and then I'm f**ked :)
If this dude going to take wrestling seriously he will become a force to be reckoned with in this community!
Off the mat this guy is sweet, delicate, smart and very knowledgeable of many subjects. I've spent an awesome evening with him following the fight and it was a great fun.
that's an easy five stars!

Vice is recommended by zivolo

How to even begin? Vice and I chatted for a few days before we finally met. As I'm new to the wrestling world, I didn't know what to really expect, as Vice said that he might easily loose to me, do to my natural built.
Oh, how was I fooled. There is a good reason he calls himself Vice :) This guy is super-strong, endless stamina, hard-bodied, and all the other compliments (handsome, communicative, gentle when it comes to that...). When we both went for submission, I sure tried to give him a hard time, and for a few moments there, I even got to hold him pretty tight. He then even had the patience to teach me a few basics. What a guy!
After that we went Pro, and oh-boy is he a good Jobber! This was sensational all the way. He is super-strong, and can (and wants to) take a lot of abuse during.
Other then the wrestling part, we had great time together, he is interesting, talkative and funny. I would be surprised if we won't meet again for another powerful match.
Recommended - Recommended - Rcommended!

Killer quads - care for a headscissors?