Challenge! Messages
More...
Days on the site
1249
Past Opponents
28
Recommendations
19 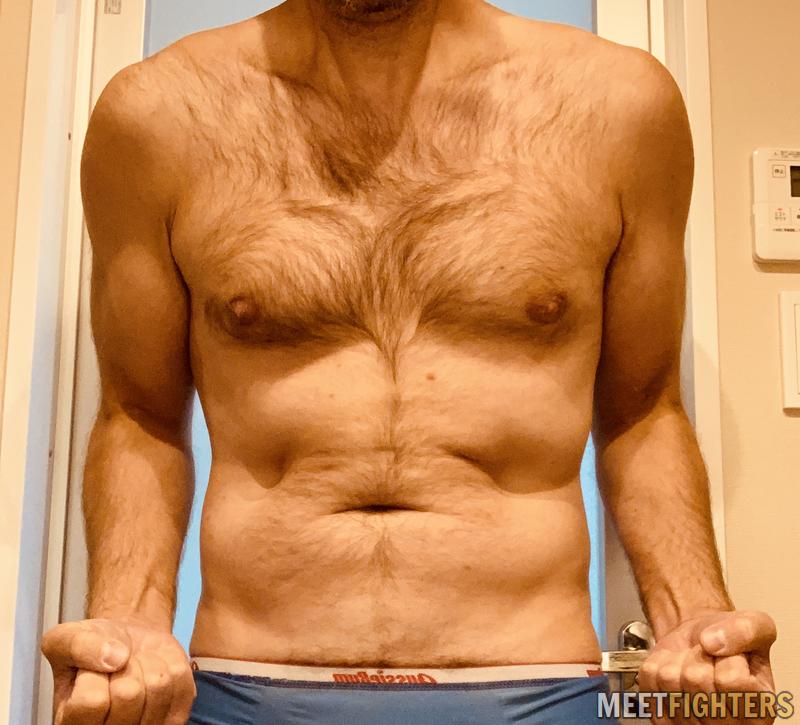 Also, not into too much pain or getting hurt so looking to stay sane at all times.

Mostly into guys close to my size but that’s not a must. Have a definite weak spot for guys older than me particularly.

Feel free to get in touch if in Tokyo. Travel quite a lot internationally.

USwrestlerTokyo is recommended by Transatlantic

We have been chatting for a while and the gods were in our favour that we could meet in Tokyo. USWT is a charming, witty, accomplished renaissance man and part time invigilator ;)! He’s bounding with energy and resourcefulness, well built and strong and a great wrestler. I had a fantastic time wrestling and sharing wine and a meal. He’s a great conversationalist and an attractive, attentive kind soul. Meet him if you get the opportunity. You will not regret it!

I was good time wrestling with him. He has nice body and power full . We had verrrrrrrry energlsh wrestling.
I hope we can play wrestling next time. Recommend him
Thank u

USwrestlertokyo is very cooperative guy. He agreed to meet me in such an awkward time, in early morning without any single word of complaint.
He is such a gentleman with positive attitude. I enjoyed 90 minutes playful wrestling match with him. He is good in controlling the pace of the match so it was so enjoyable. I would recommend him to anyone coming to Tokyo.

Very glad to have met up with Tony for a quick morning match during his stay in Tokyo. He’s a great wrestler who knows a lot of fun submission moves and how to use them safely. Enjoyed the match thoroughly and wished there had been more time for more back and forth action. Hope to meet this guy again someday. Definitely worth making an effort to meet up with him.

USwrestlerTokyo is recommended by sagittaron2

After having been in contact for months with USwrestlerTokyo, I was really happy and excited to meet such a handsome and sexy wrestler during his short stay in Paris. On top of being in good shape, he is such an interesting, smart, well educated and lovely guy. We had a lot of fun during our too shorts plays, and this meeting has definitely confirmed our strong friendship. It was also great to realize we have common interests outside the mats, and share many points of view on various topics. I wish he could have stayed longer, and really look forward to meet him again, soon I hope. I highly recommend him. Tomoyo, arigatō 😉

sagittaron2 is recommended by USwrestlerTokyo

Had the pleasure to meet sagittaron2 during my short stay in Paris a few months ago. Needless to say, he’s an excellent host and a hot, sexy, skilled wrestler as well. We had an excellent one-on-one session at his place followed by some great conversations over dinner and lunch the next day. Make him a priority the next time you’re in Paris or near him. Will definitely keep in touch with him for future matches and friendship.

Finally got to meet USWrestler and all I can say is WOW! He is absolutely one of the coolest guys I have met and one of the best matches I have had. Wish we had connected long before we did. Great guy, excellent wrestler. Everything you would want in an opponent and more. Can recommend him highly enough. Look forward to wrestling him again.

The stars finally aligned with guysports and we were able to squeeze in a match during his brief stay in Tokyo. Very pleased it worked out this time! Had some great back and forth action with him and wanted more but both our schedules were unfortunately tight that day. He’s a clear communicator and a super friendly, interesting guy: a true Southern gentleman! Will definitely hope to meet up again soon for a longer session.

I have had a very nice fighting experience with USwresterTokyo. He is a strong and fitted fighter with a enviable humor sense. I hope to meet and fight again him soon to test again his skills, strength and to enjpy his company. If you come to Tokyo don´t hesitate to contact with him.

USwrestlerTokyo is recommended by lionfish16

Had been talking with USwrestlerTokyo on and off for maybe about a year. We decided to meet up spontaneously recently, and I am definitely glad that I did. He was very friendly, easy to talk to, and humorous. He executed the heel role effortlessly. The guy knows what he is doing and had me bent and twisted in holds I wouldn't have minded being in longer haha Also, I ought to mention how good he looked in speedos, which is needless to say, a plus :)

lionfish16 is recommended by USwrestlerTokyo

After chatting about meeting up for at least a year, the opportunity to make it happen arose. Was very glad it did. We were both on the same page regarding the roles we wanted to take and after a few recent matches as the jobber, I was eager to heel with him. He was a fab jobber and extremely flexible so it was easy to twist and turn his lean body into an array of compromising positions. He couldn’t find his speedos but luckily I had an extra pair for him which fit him perfectly. We had an interesting chat over a cup of tea after the match as well. Hope to see this guy again!

Very pleasant experience with this handsome and fun wrestler. He also gave useful info about the trip in Tokyo, and even showed me the beautiful cherry blossom sight there. Will definitely meet him again when I visit the next time.

USwrestlerTokyo is recommended by dag

He is a friendly, fine and interesting person to talk to. We had a relaxed rolling around in my small hotel room. He chose to be a jobber probably due to his jet leg. It was an enjoyable evening on the eve of Sakura. It was a fun coming together to sweat, test strength and feel each other's muscles.

Lots of back and forth in this sweaty session with an amazing and very nice guy.
Ripped and fit , this was was really an awesome match and wish I could experience several others in the future. Do not miss this opportunity to wrestle him when you are in Tokyo !

It was a pleasure meeting up with this guy for an enjoyable session. We communicated a lot prior to meeting to get a good idea of what kind of a match we would have. He is very accommodating and intent on making it a good experience for his opponent. Was great to see both his heel and jobber sides coming out. Well worth organizing a match with him. Hope to meet up again.

Great time with this wrestler. He dominated me the whole match and he was a good heel who knew how to take control and dish out the punishment. A true gentlemen off the mats for sure. Would meet him again in an instant.

USwrestlerTokyo is recommended by Andy15

Andy15 is recommended by USwrestlerTokyo

Was a pleasure to meet this guy. He has a well-toned, lean and flexible body so we had a good back and forth session. He was easy to set up a time with and when he ended being free the night before our planned meeting, he texted to see if we could meet earlier. He knows some good submissions too. Enjoyed chatting with him as well. Very interesting and highly recommended.

Met USwrestlerTokyo for a short match before taking a flight back home. We both were a bit injured so we did it very lightly. He's got nice thighs that looked quite deadly. Also thanks for being a good host!

Had a short roll with him before he left Tokyo. Very dependable and easy to set up a meeting with him. He respected my limits on that particular day due to a slight injury and felt very much he was safe throughout the match. All in all a nice time with this guy who knows how to use his weight to pin you down.

USwrestlerTokyo is recommended by zhengyi

zhengyi is recommended by USwrestlerTokyo

He’s bigger than he looks in his pics and he’s got killer strong, thick legs. Watch out for his scissors - they can be deadly. Enjoyed our roll together and would recommend him.

USwrestlerTokyo is recommended by NJW77

US wrestler Tokyo is my favourite wrestler in Asia now!! He was a super gentleman on/off the mat, and intelligent;-) I had a great time, feels like I’ve known him for a long time! Definitely recommend if you are visiting Tokyo!

Doran is recommended by USwrestlerTokyo

Very easy to set up a match with him and ended up having a fun, back-and-forth style match in my hotel while I was in Barcelona for work. He looks great in a singlet and he graciously lent one of his for our match. Recommended!

Had an exciting match with this gentleman. He's originally a jobber, then I'm a heel. However, the roles sometimes spontaneously changed, and we both brought out opposite sides while we fought by all sweaty bodies and speedoes. It was so fun to hear his moan by my leg lock or claw on him. Highly recommended!

After a bit of chatting we met up for a fun-filled match with plenty of back and forth action. He knows a lot of great holds and knows just how much strength to put into them too. Great to have chances for both our jobber and heel sides to come out. Definitely recommend him!

USwrestlerTokyo is recommended by roentgenium

Looks incredibly sexy in speedos. Fun to wrestle. Was nice to practice some grappling maneuvers with him. Good technique reversing and resisting pins. This guy has good stamina. Will definitely be keen to meet again.

roentgenium is recommended by USwrestlerTokyo

After a few chats we finally met for a match and it was worth it. He is much stronger than his profile picture appears and I had my hands full throughout our sweaty, intense match. Looks great in his speedos too.

USwrestlerTokyo is recommended by Starkie

hot and sexy guy, reliable and affable, we had a sweaty and sexy match, and after he showed me where to have coffee. absolute gentleman and highly recommended.

Starkie is recommended by USwrestlerTokyo

Had a nice, sexy, sweaty match with him in his Tokyo hotel room. He was great and even took the time to show me a few holds which was cool. Friendly guy with some good skills!

Another good wrestler in Tokyo.
He likes being dominated, but he would fight back.
I beat him up, and he wanted more.
If you are heel, and need to practice your skills; you would have a good time wrestling with him.
Outside the mat, he is a great friend to have, knowledgeable, and could speak more than 3 languages. Thank you for showing me other side of Tokyo.
Tomodachi ni narimashou ne

He was a lot of fun to wrestle with; plenty of long sweaty holds. As a jobber myself, he was great- never held a hold too long and understood my level from the start. Would meet him again in a heartbeat. I got to know him a bit more after the match too and he's a friendly guy with a lot of interesting things to say. 友達になったね〜
Tomodachi ni natta!