Challenge! Messages
More...
Days on the site
2423
Past Opponents
6
Recommendations
5 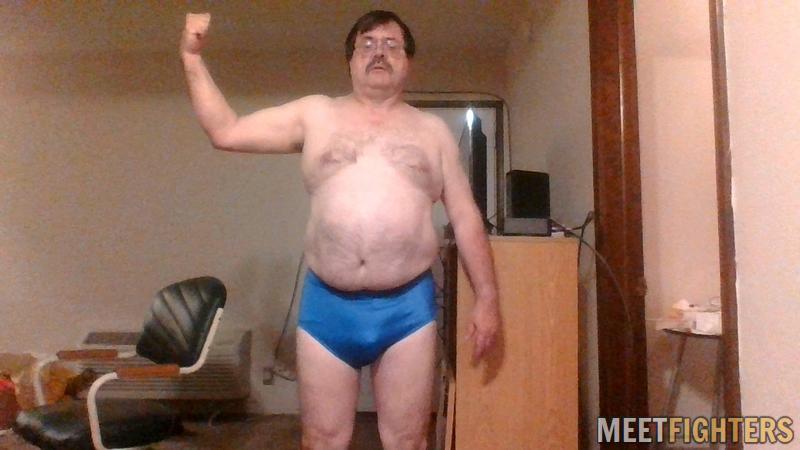 Interesting in learning pro wrestling moves. Enjoy a back and forth match. Cyber wrestling is ok because most of the time to far away. Safe and sane. Not out to get injury or to injury someone else. My Trillian account is tmacwrestler.

tmac is recommended by HeadSqueezeKing

2013–Had a match with tmac a few days ago. He says he hasn't wrestled much before, but he got me in some pretty controlling holds. Lots of fun. Likes to use those big legs, so watch out for his scissors!

2018–Met up with tmac again after 5 years. I was his first wrestle back then, but he has learned a lot since that match. We worked each other over in some long controlling holds and got an equal number of submissions out of each other. Had forgotten how powerful his legs were until I found myself moaning and squirming in his headscissors. Fun guy...highly recommended!

2019–Had another terrific match with tmac. His wrestling skills just get better and better. I have posted match pics and story on another wrestling site, and he has posted our first video on yet another wrestling site. If you get a chance to wrestle this guy, don't pass it up. But watch out for those powerful legs...no escape from them!

HeadSqueezeKing is recommended by tmac

Great guy to get to know. Knows his moves and was willing to teach some moves to me. Willing to help out a new person to wrestling.

Nov 24, 2018: Met up with Headsqueezeking in Tulsa. Had a great time. His legs are strong also. He locked his legs around my head and I could not get out. Great guy to know. Very friendly and very knowledgeable on his wrestling moves. Looking forward to the next time and hoping it will not take another 5 years. LOL. I will try and get to Tulsa more often.

tmac is recommended by Rassle4Fun

I always look for nice fun wrestling when travel. I challenge Tmac and he accepted. We met as agreed and we wrestled for hours and had so much fun. Show him a few holds and I am afraid he was sore the next day from all the action we had making him submit as many times that I lost count. By the way take some Ibuprofen. :) But I have to say we really had a super time wrestling till exhaustion and sweat. He is a very nice man! I'm looking forward to a rematch when I come back to pin his ass again.

Rassle4Fun is recommended by tmac

Meet up with Rassle4Fun on 11/7/18 while he was here in Wichita Kansas on a business trip.

Lou is a great guy. Nice and polite. He knows wrestling and how to be Safe and have Fun at the same time. When I asked him about how to do a Spaddle, and Camel Clutch, he was glad to show me how it was done. He also showed me how to do a Boston Crab.

Now I like to say that I got him to submit a bunch of times, but in reality it was the other way around. The main thing is that we had fun!

Next time Lou, you may not be so lucky....LOL.....looking forward to a rematch!

tmac is recommended by Enerjizr

Limited on time, still had a great match. Very strong, if he gets a scissors, get ready to tap out. Looking forward to a rematch with enough time to go all out.

Enerjizr is recommended by tmac

Great person to get to know. I had fun trading holds with him. He knows his moves. Looking forward to another match up with him.

OKWRSTLMARK is recommended by tmac

Mark is a great guy on the mats and off the mats. He knows his wrestling. I enjoy our match this morning. Can't wait till the next time we meet.

tmac is recommended by Txwrestlebear

I had a great match with tmac! He is a really nice guy. He is also a very good wrestler and strong bull of a man. I wish we had more time and I'm looking forward to another match soon!

Txwrestlebear is recommended by tmac

I enjoyed meeting Txwrestlebear. He is a good guy. He is strong and is a good wrestler. Looking forward to a rematch.

tmac is recommended by wildcat

Did a Halloween Rumble on my mats with tmac. We went at it for 2.5 hours. This guy knows how to wrestle.

wildcat is recommended by tmac

A great guy! First time of doing submission and it will not be the last. I really enjoyed it. Looking forward for more matches to come.

10-31 Halloween night....Had a great time wrestling with Wildcat. Great guy to get to know. Knows what he is doing on the mats.