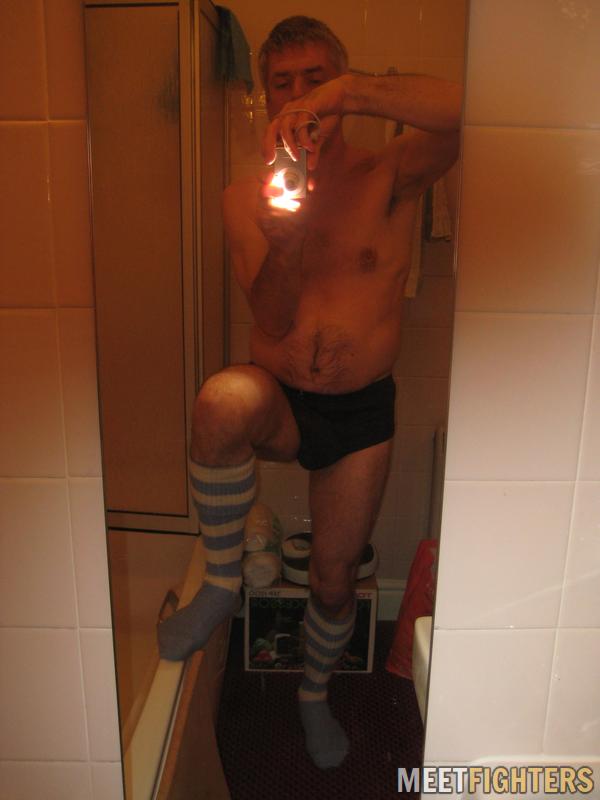 I'm just past 70 but still enjoy light wrestling, give and take etc. I've had over 50 years of action on the mats, wrestling lawn and many other places. Thanks to all the hundreds of guys from Mitch, Takedown, Globalfight, Recon and on here, who have made it such a fantastic set of experiences.

Strong and stocky, with plenty of Mancunian grit and determination, Paul is a great wrestler. We spent more than an hour locked in a hot, sweaty battle this afternoon. A first rate guy, with many years of experience, I can thoroughly recommend him to others, both on and off the mats.

What a lovely meet with this guy! He’s a pretty fit and skilled grappler, and someone who just has a plethora of knowledge. Really fun to chat with on a host of topics, I’m sad it was such a short visit. Highly recommend!

A short but very enjoyable grapple with a very tall, lean and strong wrestler who was careful with a guy 3 times his age! We both emerged smiling after an excellent tussle - he's highly recommended.

I wrestled Mike in his house in Cumbria last December and was surprised by his strength,his agility and technique.Mike can apply holds that can leave you totally immobilised.We wrestled hard and i gave as good as I got but was overpowered by his strong legs.
I spent 3 days in Cumbria surrounded by the gorgeous landscape.Mike was an excellent host and we became pals.We found lots in common and had endless conversations.He came to visit me on Anglesey where I lived briefly.
He's an erudite with impeccable manners and few people know him like I do.If you ever meet Mike you'll have trouble making him submit but off the mats treat him like you'd treat someone precious.

Met Mike at his home where we wrestled in his mat room.
A genial host who made me feel welcome and a great wrestler on the mats highly skilled and enjoyable comapny who live in a beutiful part of the UK - The Lakes.He teaches you that age is a number and you should enjoy wrestling at any age.
Look forward to grappling him again soon.

Gambo is recommended by mikecumbria

Phil came for a wrestle this afternoon. He's lean and fit and a strong and determined grappler with plenty of stamina and will develop his man to man skills with practice, he's also very pleasant company over a cuppa.

mikecumbria is recommended by Glasgow1971

Mike is a great guy a very skilled wrestler, can't believe it was nearly 6 years ago that he was kind enough to host me and give me my first introduction to wrestling. I seem to remember him pinning me lots and not been able to quite work out how as I definitely had the height and weight advantage. Mike is very patient and a great teacher, it would be a pleasure to wrestle again. Off the mats he's a genuinely nice guy with years of experience and generous to a fault.
Hopefully catch up soon.

Glasgow1971 is recommended by mikecumbria

Mark came to my matroom in Cumbria for his first wrestling experience about 6 years ago. Although he seemed a bit nervous at the prospect, he soon relaxed and let me show him a few manoeuvres on the mats and then he responded well, picking techniques up quickly and using his slightly greater height and weight than mine to his advantage, so it turned into an excellent give and take session. Lovely guy off the mats, too, so he's highly recommended.

Mike is something of a maestro. He weighs two stone less than me, is significantly older and usually keeps me on my back for long periods of time while I do all the work. A great teacher, puts you at your ease and lets you learn from your mistakes. If he invites you, don't miss the opportunity.

I've met Jimmie a few times for a wrestle in my matroom. He is short and stocky, very strong and determined, with plenty of stamina and energy. Highly recommended.

Mike pasted me! He had me pinned under him and I could hardly move. It was a good match though and well worth the drive over. As he says I don't give up easily. He's a good bloke.

Round 3 (or is it 4?) with Mike yesterday. On his lawn in the blazing sunshine. Again I had a great time and he gave me some coaching too. I'd recommend Mike to anyone; no matter what their level of skill.

I went to Mike's yesterday (December 6th 2014). I had another good day and a great wrestling session. Mike is a good opponent and also gives me tips and advice. Thanks again Mike.

16/1/16 - Another session with Mike at his place and another great time. We wrestled for a while and he gave me much needed guidance. I got a couple of subs out of him but I'm never totally sure if it was all due to my skill. A great bloke, good company and one of the men I'll return to over and over again.

Brian is a very strong, experienced, skilled wrestler who likes to come out on top and will fight long and hard for it, but also a very friendly guy, too - great to relax with after the fight.

We met again last Saturday, 6th December, for an excellent hour and a half's grappling on the mats. After a gentle roll to warm up it became another great tussle for dominance. Highly recommended!

I met Mike at his place in the Lake District while visiting the area. We had a great flowing training session where he threw in loads of tips (and me around!) while we grappled - a very informative and enjoyable meeting. Mike is also a very interesting and hospitable guy off the mats and I look forward to a return visit to enjoy a session on his lawn in this stunning location.

Just met Andy for a training session. He's a strong, fit novice, with powerful arms and legs and some good basic techniques and he's learning fast. He picked up lots of ideas about balance, leverage, positioning and controlled breathing quickly during our hour on the mats, and he'll soon become a formidable opponent. Highly recommended.

Frank and I wrestled several times over a couple of years at my old matroom near Windsor. He is strong, fit, and amazingly flexible (it must be all that wonderful Yoga!) and our struggles lasted for up to two hours at a time. Beware of his strong legs, which he applies like a carpenter's vice. He's also an extremely pleasant and likeable guy, who was excellent company when we had a meal afterwards. Very strongly recommended.

mikecumbria is recommended by Lancs guy

Mike is a friendly genuine accomodating guy.
Have visited him a number of times in the Lake District & have always found him to be the perfect host

Lancs guy is recommended by mikecumbria

A very genuine, reliable and skillful wrestler - always safe, sane and sensible on the mats and great company afterwards

A really good meet. Mike is a very skilled and experienced opponent, totally safe - and generous on the mat with those of us still in need of a bit of direction. He's also very hospitable and good company, so recommended all round.

Ian is a delightful guy, both on and off the mats. He is very strong, fit and flexible, looks 10 years younger than his age and has some very powerful techniques as well as sharp elbows, knees and chin - with a bit more training he will become a formidable opponent!

Lewis came to my matroom to wrestle for the third time this afternoon and again we had a great match - he is strong, flexible and determined and he doesn't give up easily. Highly recommended.

Mike is very good at pinning you , without you noticing it !

Broc is recommended by mikecumbria

Broc and I had 3 really excellent wrestling matches at my old matroom near Windsor in the summer of 2007. He's strong, fit and determined and came back for more - also a really nice guy on and off the mats - I can't recommend him too highly - my Wrestler of The Year Award 2007.

Mike is a true gent and an excellent wrestler/judo fighter: very skilled and tough and dominating. He's also thoroughly nice and generous off the mats, so it's well worth a trip to see him.

Richard is a great joy to wrestle - strong, flexible, agile, determined and quick-witted, with powerful legs and lots of good techniques. I can recommend him to any guys wanting a really good, competitive, safe, sane and sensible match. Hope to meet up again soon.

Glasgow is recommended by mikecumbria

Pete is a great guy to wrestle - reliable, fit, friendly and fun, he introduced me to the great delights of oil wrestling in a plastic swimming pool yesterday. He's strong and flexible as well as determined and persistent - thoroughly recommended.

Thoroughly enjoyed wrestling with Mike though Mike outclassed me in strength, technique and experience. If there's one thing I learned its how to breath properly when you have an opponent trying to control you and how to shift your balance! Mike is a lovely guy and a first rate coach when it comes to grappling technique.

Robert is a star - thoroughly reliable, fit, lean and strong, and extremely determined not to be pinned and he will fight for ages, using his very strong legs and arms. We grappled for over 2 hours this afternoon in some heat and both enjoyed a thoroughly good workout - I can recommend Rob to anyone wanting some serious submission wrestling: you won't be disappointed! Mike

greg1969 is recommended by mikecumbria

mikecumbria is recommended by wrestle570

Really nice person and wrestling partner, able to teach you and make you fun. We had nice wrestling together. Very hospitable and honest man. I recommend him to everyone. Thanks

wrestle570 is recommended by mikecumbria

A very strong, flexible, highly intelligent, handsome and technical wrestler - one of the very best grapplers I've encountered in over 50 years of wrestling - extremely highly recommended to all serious wrestlers out there.

Just had an excellent wrestle with Armboy in my Berkshire matroom - he is highly recommended for anyone wanting a long, hard, but fun grappling session. Very reliable - he travelled a long way.

mikecumbria is recommended by polo62

Mike is a great guy and very skilful in wrestling and judo. He provided excellent facilities,hospitality,training and workout and I would fully recommend him to anyone.

polo62 is recommended by mikecumbria

A really good guy to wrestle - strong and fit and gave me an excellent workout on the mats.

Mike is a highly skilled competitive grappler, who is safe and sane and can wrestle to any level. You can definitely learn from him and he will make you feel welcome and comfortable...

A regular visitor to my matrooms both north and south, he is an excellent wrestler - strong and skilled and good company as well