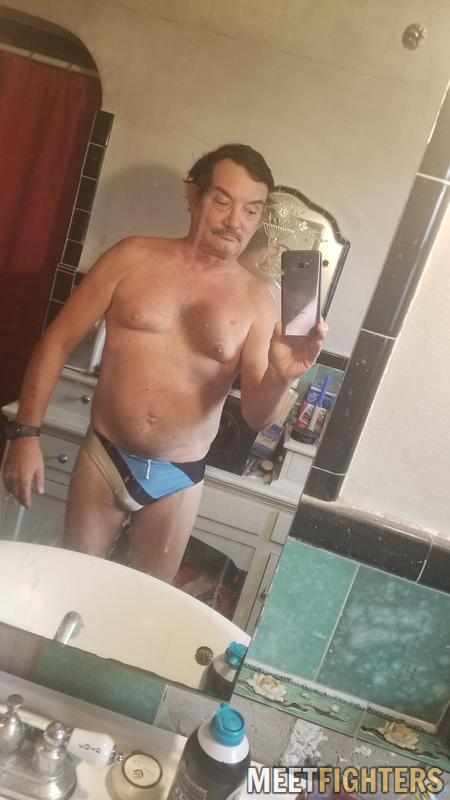 I am willing to travel 150 miles

looking for serious and competitive matches. Have mats in garage.

Some past opponents are not shown in the list above. Members who are blocked, suspended or on a hiatus are hidden.
Enjoy cyber wrestling? Try our brother site, ChatFighters.com!
LBFighter has no cyber opponents.

LBFighter is recommended by Slugfest

Followed through on my challenge to LBFighter recently. Don't let his age fool you. I stepped up but took a pounding.
I definitely want a re-match.

Slugfest is recommended by LBFighter

we waited for 20 plus years to have this fight. It finally happened. When he says he is going to show up, he does. He had guts to take me on. And if he challenges me again, I'll be in his face.

Met Rhino today. Put the gloves on and had a short bout.
When not out to beat the crap out of you, he's an awesome man with a heart of gold.
Highly recommended for a bout

Another long overdue recommendation. It was years ago now, but this guy is for real. He's a powerhouse when he unleashes. Not to be underestimated.

Extremely tough opponent. The real thing. From rules to no rules he'll take you on. Our fight was short, but the rematch will be more intense. He beat me one. Next time I'm coming back stronger.

Tough guy and aggressive fighter. Likes to mix it up toe to toe. Be ready for a fight if you take him on.

Took several tries, but finally got our first match out of the way. He's tough and to willing to back down. He'll dish out what he gets.
If you are looking for a good workout, you found it.
Look forward to more and brutal rematches against him.

"Just try not to kill each other down here"... said the GREAT Bill Hughes, (RIP Sweet Bill) to us as he opened the door to his basement mat room under his Boxing/Wresting gym in Long Beach. It was 1996 and i was 20 somethin' and stoked to fight n wrestle LBfighter. It was like 10 at night and Bill Let us in after hours to battle in the basement. We'd talked shit off AOL, but work had sent me to cali, and we settled on a rough sub match with body shots (this is when he was still rasslin - before he was only doing brawls with head shots) - Dark, just some overhead lights - Huge mats in every direction, big heavy bag in the distance, big hole in the floor to piss in, AWESOME place to try to pry each others head's off.
We stripped to speedos, got nose to nose and hard, rough , fast moving first fall came at a breakneck pace. Counters, moves, strikes , hard throws. When we got up after that first fall he just looked at me. "Well, you know what you're doing..." still one of my favorite compliments. We battled into the wee hours of the night. Great fight, one of my faves. Great guy too - been trying to talk him into a just grappling rematch 21 years later - but we have diff styles these days - Great fight though - and a sweet, cool dude.

Good guy and tough opponent. Will give you a great workout and you'll both spill some sweat in the process. Friendly dude off the mats as well.
Give him a try when in Florida, you won't be disappointed

LBFighter is recommended by Jock Buster

We go back a long ways, but
he's really tough, likes stand up boxing, striking combat, but likes to wrestle too

Jock Buster is recommended by LBFighter

Been a long time since we competed. But Jock is a great guy, has some serious skills, and will offer you a great workout. Recommended to any one looking to learn a few things.

This is one tough little scrapper here. A great guy and if anyone gets the chance to take him on, go for it!

Doc and I have know each other for many years now. Only had one fight so far. DAMN he's tough and good. He'll give you exactly what you ask for in a fight. You want it friendly and sweaty and fun, he's there. You want it mean and ugly. he'll bring that too. He will not back down.
Recommended for any one on any level

Irishstrong , met a couple years back. He's for real and as tough as they come. Beat me pretty good in our garage match.
Recommended to any one looking for a serious fight or serious workout. This man does not back down.

LBFighter is recommended by Boxer Daddy

John is one tough SOB. Even when facing a better boxer he contines to fight on in the face of great odds. Truly a pleasure to glove up with and swap leather!

Boxer Daddy is recommended by LBFighter

Doc is a very experienced and skilled boxer. By all means, spar or fight with him. He is a gentleman out of the ring, and an animal in the ring. But he knows how to pace with your skill and limits. The boxing match will be fun and an experience you don't want to miss.

LBFighter is the real deal, and it's tough to beat that as a recommendation. Take him on if you're for real too and want an honest fight. Cyber guys though head the other way!

Ruff is for real. Good skills, and strong. Friendly off the mats, and a mean SOB on the mats LOL Don't miss challenging him.

lance jeffers is recommended by LBFighter

Lance is an awesome man, and the best friend you can have, until you step into the ring or on the mats with him. I have never seen him lose. He certainly handed me my ass a few times. LOL