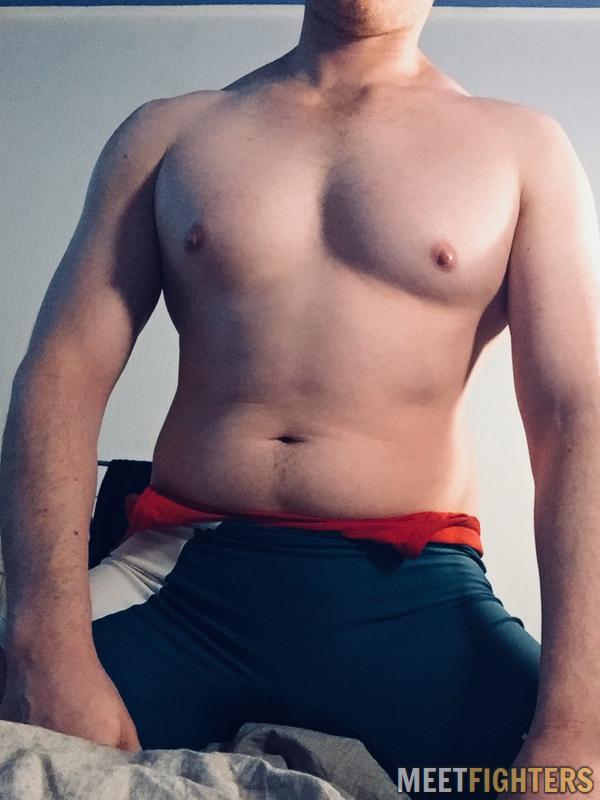 I am willing to travel 50 miles

Originally from Australia but now living in London for over 10 years now. Looking for mostly submission bouts. Open to gear. Have met a few good guys on here that I now met regularly. If you wish to meet send me a message.

Good, long, two-way match. Handsome strong guy with good body who likes it real. Plenty of submissions. Nice guy to be with and recommended to anyone looking for a good grapple.

Spent a good afternoon grappling with centrallondon. Fit, friendly guy very strong. Very difficult to get out of his holds make sure you are prepared for a good match.

21/2/21 Met again after a few years. Very very strong guy with a great body. Highly recommended for a match.

Great robust and stubborn grappler! If you are up for an intense give and take he is the guy for you! We rolled tirelessly back-and-forth. Making him tap is as hard as it gets :) Great off the mat as well and up for round 2 anytime :)

Met this guy at a little group meet on a short trip to London, great strong guy, had a good little match. Seem quite evenly matched, had a good roll. Definitely recommend this guys and would be up for a rematch next time I'm down south

Had a great fight with him. Very flexible along with very strong legs make it tough for him to submit. Hope to meet again soon.

Have a rematch with fightwell on my second trip at London, the wrestling and roll with him is getting better and more enjoyable, he is getting more technical as time goes by and i been push to the limit for our roll as well, definitely will love to meet him whenever there is a chance.

December 2018
I met fightwell at Walthamstow organized by another member, we had only roll once, but what a epic roll with have, athletic, strong, and bring out the fighting panda in me! As time goes by, he will only get better and I can’t wait to have our rematch again.

Had a great few rounds wrestling with this tough, strong and determined guy. We were pretty evenly matched and made each other work hard for each sub.
Looking forward to round 2 soon

Had an enjoyable time wrestling Coedyuk, despite the 15kg difference. Tough, strong wrestler where it is hard to come out on top. Managed to get a couple of surprise submissions on him, but he eventually wised up. Looking forward until we met again.

fightwell is a real beast in the ring! We were able to schedule a fun match in the London Matroom and turned it into an intense submission contest with no holds barred action. An extremely skilled grappler, fightwell kept the advantage most of the time both defending from my take-downs while fiercely striking with submission holds. Once he got on top, he easily trapped me with his strength, keeping me locked and pinned to the mat for much of the match. We went back-and-forth a little bit, but he cleverly predicted and escaped my every attempt to put him into a boston crab or arm bar. After tricking me into exhausting my energy, he made a game of dominating me with intense attacks and holds that finally had me submit. I recommend fightwell to anybody in the area looking a tough and challenging match.

fightwell is recommended by RNC36

Fightwell was my final match of the day and this made the challenge even greater. Strong and solid with a good arsenal of moves. Handsome guy in great shape and nice guy to talk to away from the mats. Would definately be up for a rematch, next time when im fresh though haha

You have to be careful about how fast alexxwrestler actually is, he can go from 0 to 100 in an instant and will be squeezing you in between his legs in an instant. It was more fun making him struggle and submit however, which is not easy to do. Alexxwrestler will push himself to his absolute limit before he will finally give up. A great first meet and hopefully not the last.

Met Fightwell yesterday for a match in London. Great guy. Easy to organise with, in holiday time and v friendly. He has great stamina as we wrestled almost non stop for 2 hours. Looking forward to a rematch soon. Definitely recommended.

SPWrestler is a skilled and strong wrestler as well as very friendly. Had a good 2 hour wrestle and was virtually impossible to submit the entire time. Up for another meet again.

Met Fightwell yesterday in Walthamstow after a few weeks of waiting and it deserved the time . He is quite strong and pics don't do justice. He knows his wrestling and is quite determined and reluctant to submit. It was a long and intense match where we alternated having the upper hand and quite exhausting in the end. Nice, relaxed guy off mats easy to arrange a match with. Rematch anytime . Highly recommended.

Met madridwrestler after months of planning, Well worth the wait. Very skilled fighter who knows how to avoid getting submitted, and knows how to submit. Fought for a good hour with neither of us willing to give up easily. Recommended to fight again.

fightwell is recommended by freestyle

I had the previlage of meeting fightwell today . We matched up quite close for a good even match. We wrestled for 3 hours so was a nice sweaty work out .
Both on and off the mats he is a great guy and very sane n the mats.
He has a very strong upper body has good and powerfull head locks too and very hard to control his arms took my two arms to try to control his one at times.
Also knows quite a few holds some of which are very imobilising and hard to break free once he clamped them on you he does not rush for the sub once he knows he got you good but slowly works up to the sub. He even managed to get a a camel on me .
Great staminia too . And yes he does look more defined in real than his pics would suggest :)
If you ever in london or he offers you a match you should act on wrestling him as soon as possible , you wont be disapointed an AAAA+++ opponent and guy highly recommended and would wrestle again

freestyle is recommended by fightwell

Met freestyle after talking on and off about meeting for a while. Lots of stamina and a good guy to wrestle against. Had to be careful against him as he will try to capitalise on any mistake you make. Definitely recommended.

I had a very good match with him and looking forward to another one. Wrestled for about two hours and could continue for a while more. Easy going, strong and knows about wrestling. All around great guy and highly recommended.

Had a great match with Pirgos. We were very evenly matched. He is very interested in wrestling and very easy to talk to. Will look forward to our next meet.

We had a rematch after a good few years! Can't believe it has been that long! We had a fun competitive match and Fightwell put me through my paces but I made him tap a few times more than he got me ;). We won't leave it so long again.

Meet again after meeting about 6 years ago. Very enjoyable match despite the height difference. Can hold a good conversation too. Hopefully not so long before meeting again for round 3.

fightwell is recommended by swiss75

July 2015 Rematch today after a few years, and this time was even tougher to fight him
Nice to get it on with this strong aggressive musclestud!
Got at it quite aggressively but always safe and sane sticking to safety rules! Definitely a good rough workout. Beware of his strong arms in which he locks u up tight and u have to fight very hard to get out of it
Never stopps, always ready to fight more
And yes it is nice to make a muscle guy tap :))
Hopefully more matches in future
Real nice guy off the mat

Great guy, strong and with a lot of stamina
good rough but sane submission grappling
real nice off the mat too and uncomplicated to set up a match, even on short notice if he has time...
rematch sometime ;)

swiss75 is recommended by fightwell

Friendly, strong and very skilled wrestler. Had an enjoyable time having a pretty aggressive match.

Met for a second time. Very hard solid, aggressive and sane match. Very friendly guy who doesn't seem to have any kind of pain threshold! Until next time.

This guy will pleasantly surprise you when you see his hard muscular body in real life. He takes on much heavier guys with no respect and puts up a great competitive fight. He is super fun to roll with, very reliable and totally recommended to everyone. A definite repeater!

August 2014. Not often I meet a guy three times and especially not in such a short space of time. Always have a real blast with him - great muscled bod, great fun, strong boy. What's not to like?

Can't believe I haven't met this guy before. His pictures do not do justice to how well built, muscled, and handsome he is. Our wrestle was exhausting - only in part because it was one of the hottest days of the year. Trying to move this powerhouse around was not easy and he caught me off guard lots of times. This was definitely one of my favourite wrestles and I really cannot wait till we hit the mats again. Highly recommended.

Nice friendly, fit guy to be around and great to fight with. Has good stamina. He likes to be on top and be a bit cocky. That's when his guard in down! Will definitely fight again and recommend.

fightwell is recommended by polyethylene33

Fun, good, four-way match. Strong guy with a great muscled body, whose pics by the way don't do him justice. Looking forward to the next round

polyethylene33 is recommended by fightwell

Technically very very good, had an answer to everything I could throw at him. Very sociable and good guy off the mats as well.

fightwell is recommended by Mark uk

Have wrestled Adrian several times now and gets better and better everytime we meet. Met for a 3 way last week and have a 1on1 match this week, can't wait. Definently a absolute must as a recommendation from me. mark

Mark uk is recommended by fightwell

I've only been putting off writing a recommendation for Mark as I am terrible a writing them! What can I say, he introduced me into the wrestling world back when I was nervous and unsure of myself. I have met him several times and he is a all round good guy who is definitely into the sport for the fun of it and will respect whatever limits you may have. He definitely wrestles for enjoyment and definitely likes to make a bout last, even if he is winning.

Incredibly knowledgeable and passionate about MMA and Grappling. Gave me some good tips. Hopefully next time we will be able to have a longer grappling session.

Great match with fightwell. Really good wrestler with plenty of interesting holds. Also just a nice guy who you can have a conversation with as well. Watch out for his headlocks! Hope we can meet again.