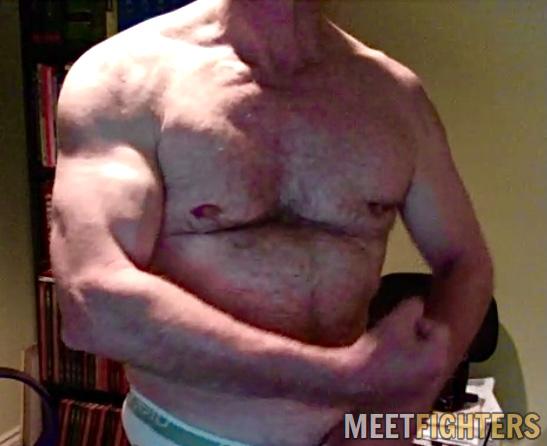 Muscled athletic Australian man.. keen sportsman- lifter , runner, surfer, wrestler and some boxing. Keen to fight other muscled men, of all ages, who are in good shape. I like writing , illustrating, and reading wrestling and boxing stories, and am happy to send mine, if you'd enjoy them. I like to cam on SKYPE as well.. flex and challenge each other... into muscle worship and comparing physiques. Am very competitive and get turned on battling a mature muscled man who knows what he needs from the match.

Finally had the opportunity to meet Matchest, a friendly guy with a strong and impressive physique. Not to mention a killer smile - even when he is being punished. I am 25kg bigger and he still shaped up for a great wrestle. I look forward to another round.

We have circled in the same city for a long time. He finally accepted my challenge, saying "Lets have a roll" and from his first massive double biceps flex, I knew I was eyeing off a beast of a man. We flexed , pushed, shoved , rolled, wrestled, and he tied me up good. I always knew those epic muscles would be incredible to counter ( after seeing each other on cam many times ) and the tank didn't give an inch... I was out-weighed by 25 Kg ! but what a hot, friendly, accommodating muscle tank. great chat after and left good buddies .. I still want to ref. a match between you and another equally-muscled wrestler, R... and guys.. my full recommendation but prepare for a struggle .

Had the pleasure of meeting him for a fun bout in Queensland. He is very polite and a gentleman off the mat. He's got an impressive bod and knows what's he's doing. Super chill guy.

I finally met up with this muscular powerhouse .. we armwrestled..then we wrestled aggressively ( tests of strength and using our favourite holds )...It was a sweaty and intense struggle all the way. I guess I out-weighed and out powered him , but what a memorable hour or so of Alpha flexing, posing and muscle on muscle wrestling. This man needs to be on your opponent list, if he is nearby...hot, full recommendation, wrestler

Had a great match today with matchest at his place. He’s a bundle of energy. We had intense session wrestling, arm wrestling and with tests of strength and plenty of flexing 💪🏻. Hot sweaty session and impressed by his stamina and energy. His got great definition particularly his arms and chest. His pics don't lie. A great host too, picking me up and dropping me off at nearby public transport. Very hospitable and a lovely guy off the mats too. Don’t pass up the opportunity if you get the chance to wrestle this beast!

Finally. met this mountain of muscle. We flexed, wrestled and tested each other's strength. This man's body, struggling in a wrestle, is something to see !!-thick solid muscle, a totally proportioned athlete; his thighs are so strong and sturdy, he is difficult to throw or pin. He is a great guy as well and we had a blast chatting and getting to know each other. Our second meet was just as exciting..he reinforced his dominance and was even bigger/ stronger. The ultimate humiliation-he hoisted my body over his huge shoulders, did three grunting squats and carried me around the room. Highly recommended if you want a hot looking Body Builder / wrestler.

matchest is recommended by jpw

Meet up with Matchest for some muscle worship and some hot sweaty wrestling action . M ticked all the boxes flexing those hot biceps and pecs . We wrestled for a hour or so and my did the time fly . M is a friendly easy going guy who I would highly recommend for anyone to catch up with him and wrestle when in Brisbane. Hope to catch up again one day for a rematch. Rematch happened on the 2/11. And once again was a hot wrestle with matchest with some muscle worship as well . Also a great guy to talk to with some interesting stories to tell of his wrestling experience . If you get the chance to wrestle matches you will certainly enjoy.

jpw is recommended by matchest

We matched well in body stats. He likes well developed chest and ceps and I am a legs man.. so so we were both lookin good . Wrestling nude from get go by choice , we had an hour or more of athletic and hot, keen , verbal struggling. There were plenty of tap outs and the intense wrestling was "interrupted" by plenty of flexing and aggressively feeling each other's bodies ... just my kind of match ! We both called a halt, exhausted but satisfied men . This guy is reliable and hosted me this time. I am keen to wrestle J again, and will be more wary of those big muscular legs, buddy. Yes, our second meet confirmed my first notions about this guy.. he enjoyed punishing my pecs and biceps and I had a good look at the hottest legs you're going to have wrapped around you. We both agreed, it was an even battle and the muscle appreciation was real intense again. ...fully recommended !

This Canadian wrestler and I have chatted and cammed for years and always needed to wrestle ... so, completely by chance today, in a sauna in my city, I saw this solid muscular stud and followed him to a private room, where we rubbed each other down and then, well, "push came to shove" and we had a muscled-up wrestling match with verbal challenging, flexing, strength testing bearhugs, nelsons and much more. Yes, space was limited but it was a hot clash and very sensual. ...After talking a little, we then realised who we were battling... AMAZING chance meet with a Meetfighters buddy .. its a small world ! He's a hot opponent I want to battle again !!! ( It also proves my theory about putting your wrestling passion out there.. it pays off !)

matchest is recommended by Alpha Destroyer

Had the pleasure and honor to fight this handsome muscled and in-shape aussie while in Brisbane for work. Everyone I met here was first rate - courteous, strong aggressive, but respectful fighters. Matchest was no exception! He had sustained an injury as result of a match earlier in the week so we did a light wrestle...testing our strength to see who would dominate. The Destroyer came out on top......again. But my rival is a worthy adversary and happy to give him a rematch anytime he wants. Thanks for a great time muscle daddy!

Alpha Destroyer is recommended by matchest

I approached this match with a bit of hesitancy - for one, I was carrying an injury (again!) from a recent match, and two, I had heard that Alpha D was an aggressive, non yielding wrestler... not only was he appreciative that I didn't cancel, he was accommodating in the intensity of the battle we had. We struggled like real muscled daddies and both wanted to fight it out, but he definitely came out the clear winner. He is a well-muscled and trim handsome athlete ( we both got well-aroused flexing and feeling each other's bodies ) .. a hot looking man in every way. We were both charged for a very athletic but sensual grapple and that's what we had. He knows I want to fight him again and maybe even the score a little.

A tough fit well-built older guy – one of the best 50+ guys I've met from this site. He's also very easy to organize a match with and 100% reliable. And some of you may know of his writing skills – he's done some very hot stories about wrestling matches. He's also a nice guy, and we had a lot of fun rolling around and getting into some hot submission holds. Highly recommended!

This well muscled man is a good athlete, and knows his wrestling moves. We have communicated for few years and finally got to meet each other for a match..it was well worth the wait. He is a good guy and very intelligent.... we got down to some primal wrestling and verbal struggling , and flexing, and exchanging of close-in, muscle grinding holds...we both ended our meet very satisfied men. Will wrestle this experienced powerhouse again if the opportunity comes along.

Was delighted to be able to lock up with this well built guy! The pics don't lie. He has amazing upper body strength! Nice arms too! We wrestled more promission, but it was great fun. He keeps on coming back for more! Off the mats a fascinating guy with lots of good conversation, humour and interests! Totally safe and sane. HIGHLY RECOMMENDED!!

We arranged a three way wrestling meet with Long for This, another big strong wrestler from Meetfighters. After flying from UK via Dubai , this solidly muscled and powerful man subdued me in more than an hour of give and take struggling. Experience overcame what I had to bring to this battle. We had a great morning getting to know each other's stories and realising that the world is a very small place . Meet up with Dadwrestle if you get a chance... not easily conquered or forgotten.

matchest is recommended by Long for this

Met this stud on a 3 way session in Brisbane last week. Great body & a strong keen wrestler. We were a great match strength wise & I loved putting it to the test !
Matchest is a great challenge & hates to submit ! He’s a lovely guy on & off the mats & very easy to talk to. Talented writer too, recommend his blogs ! If you want a good hot sweaty roll this is your man. I can’t wait to get back to Brisbane to have another crack !! It’s a gold star from me !!

Long for this is recommended by matchest

Long for This arranged a three way wrestling meet. We had a tough struggle from get go, and I was subdued by this man's thick and muscled upper body more than once. He is a powerful wrestler and we both tested each other during an hour or more of competitive muscled up wrestling. After some initial straight pins and subs, a round of nude wrestling was a hot primal experience. I will meet this muscular powerhouse again, if the opportunity presents . Highly recommended.

matchest is recommended by Tripolar

Our match was hampered by Matchest's injury but he still showed plenty of fight and determination to power along during the wrestle. We match up well in size and I'm sure it will be a tight contest when he's fully fit again.

Tripolar is recommended by matchest

I would highly recommend a session with this strong, well muscled and intelligent guy. We plan to wrestle again, as I was hurting some from a gruelling previous match, 2 days before, and couldn't give 100 %. But we still tested each other, and got a firm idea of power and endurance potential. We both obviously enjoyed our encounter in every way. 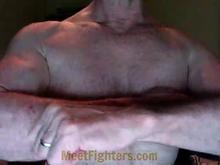 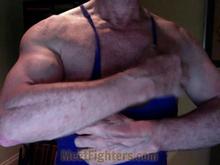 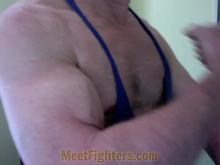 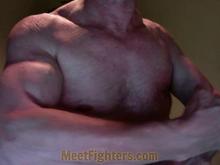 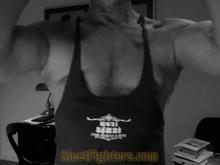