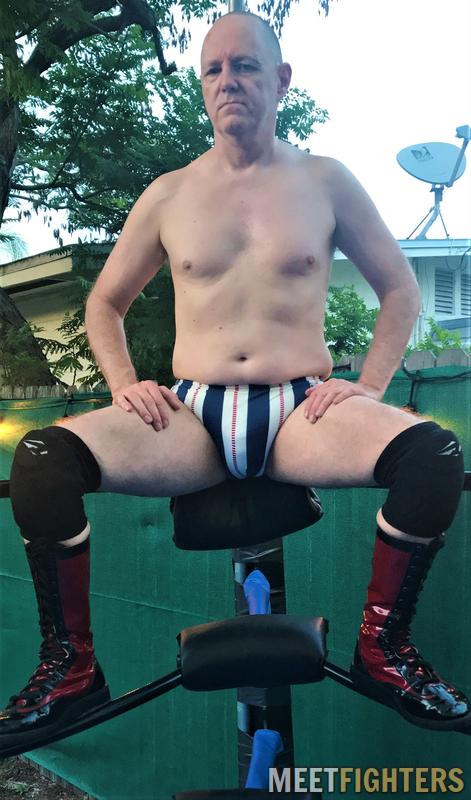 Member of the Hundreds Club

Love pro fantasy rassling , inside a ring or out. Also enjoy cyber matches, pro style in a ring , back and forth action.

I first met Bouvier at a Wrestlefest in NYC. I thought he would be too light for a good match. A friend told me he was great fun. Boy was he right. Although it was a short match and I was early in my career, Bouvier and I had a great classic pro give and take match. Plenty of taunting, scissors, suplex from floor to bed, full body press. Despite his light weight, he is a good looking, hairy, pro guy who gets it. Full of bravado. For a fun classic pro match, you won't be disappointed meeting Bouvier. Now that I have become an Evil Russian Bear, I welcome a rematch opportunity to destroy the midwestern stud champ!

I have been wrestling with this great man for about 15 years. He is a pleasure to be with both on and off the mat. Hoping we can connect many more times. Highly recommended.

This wrestler is one of the highest caliber wrestlers out there. He knows his moves and is great at executing them. He is a gentleman on and off the mat and I highly recommend him.

This wrestler was the highlight of my NYC wrestlefest this year. he made our pro wrestling match one of the best I had in years. Cocky and a big mouth , BUT he can back it up much to my enjoyment. Great match up !!!!!

Jack is a great wrestler who understands the give and take of pro style matches and who looks hot in pro gear. We had a great hotel match and I am sure we will have some more while he is working in Denver.

I have not rassled this guy for a few years. He always was a good rassle, no he is great. A HEEL to be reckoned with. Fills out his singlet nicely and the pro boots make him the ulitimate pro rassler. He has also added many new holds/ moves to his arsenal and can make a jobber moan and groan !!!!!

I have know this good guy for many years. wrestled many times, have many pics of our matches. He has stayed with me on several occasions. He is the best at pro fanatsy. loves it, has a great sense of humor and makes it work for both guys. Sometimes I am laughing so much whike wrestling I can't lock him in a hold any more.

Don't let his pics with the mean face fool you. He knows how to make a pro fantasy match lots of fun. Recommend!

This guy is strong and tough as nails. He knows lots of holds and can give as good as he gets. I highly recommend a match with this Country stud.

Had a really hot cockfight match with him while I was at wrestlefest. He said yes the minute he could for match when hardly anyone I spoke to would do the same. Nice guy.

jackbouvier is recommended by Kolter

Yes, I enjoyed my time with him. He is a calm person.
He used dirty tactics on me which I like. I wish I can have a match with him in a ring because that where he belongs. He will fit very well in a pro ring.
Very good if you have a chance to meet him.

I had seen his profile over the years, but never had an opportunity to meet until today at Wrestlefest. While primarily a Pro guy, Jack is a very versatile wrestler and I had an awesome time rolling with him. I highly recommend Jack, he is fun, safe, sane, and a quality guy on and off the mats.

Had a blast with this pro wrestler...Knows alot of fun holds and knows how to do fun old school pro brawling too. I def recommend..Looking forward to a rematch!!!!

Great pro wrestler , knows his moves and has a great wrestlers body. Highly recommend him.

I have wrestled around with jackbouvier on 3 different occasions and enjoyed the time with him on the mat . I was able to also photograph him in some of his wrestling gear and also was able to get some photos of him and I as we were wrestling . He is a great guy and a lot of fun on the mat also . I recommend him to anyone that is interested in wrestling .

jackbouvier is recommended by rasslin bodybuilder

jack is a classic old school pro wrestler who knows tons of wrestling holds, love pro fantasy wrestling and even with a short amount of time and space, we fit in holds like bearhugs, groin split, scissors, he got me in most holds as I am a lot bigger and heavier so i become the jobber for him. recommended for anyone who wanted to experience pro fantasy with jack!

Wrestled JB a couple of times and look forward to more tangles in the ring. He enjoys the pro scene and gets into all the elements too. Friendly guy out of the ring, lots of attitude inside it. He’ll make you work for the win!

The Cowboy Jack Bouvier is the Real Deal. True to old school pro rasslin, we had a Saturday afternoon classic rasslin match. Blow-for-blow, hold-for-hold the match went back-n-forth with the only resolution being that there will be a rematch of the two heel villians: Johnny Crash vs. The Cowboy Jack Bouvier.
Guys, if you haven't met or rassled this Rassler, you're missing out and need to schedule a match for the best time you'll have in pro rasslin. Just as awesome as he is in the "ring", he's just as great getting to know and spend time with outside the "ring".

This pro rassler is nothing but fun !!! Knows the pro rassling world and how to make his opponent suffer !! Do not pass up a chance to rassle him.

Jack and i meant twice and both times were a great experience.
We wrestled in a variety of outfits.
It was easy going and we took some awesome photos
Would be a pleasure to wrestle with him again

What a great time pro rassling in gear with the Mid Western champ. Kept me on my toes even with his pin and submission and dirty tactics, which I happily returned. Watch out for hotel rooms, Jack, lots of foreign objects around to use in a back and forth dirty tactic match.

Had a great classic pro match with jackbouvier. Felt like I was in a 70's/80's pro match. He has the classic pro look/gear and knows how to wrestle.

Great pro rassler, back and forth and great fun !!!!!

filmed my favorite ever big vs small match with him,,,great dominant heel outweighed him by 111 lbs. at the time...awesome...great house guest too

Had a long sweaty tag match that Jack was in. He's a hard fighter & very tough. I enjoyed it immensely!

Have met up with jack a couple times for pro rasslin and always have a blast. Don't. Miss rasslin him

This guy is for real. Great at pro - talented, energetic, enthusiastic and fun! If you have the opportunity, get a match with him!

jackbouvier is recommended by the punisher

jackbouvier is recommended by rassler 315

i enjoy wrestling this veteran of the mats and ring. He's savvy yet vulnerable, easy to roll with. Thanks for the match Jackie B.

rassler 315 is recommended by jackbouvier