Challenge! Messages
More...
Days on the site
3164
Past Opponents
79
Recommendations
10 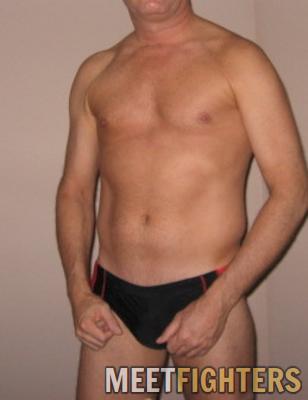 Kentucky wrestler here with mats. Any coming to KY or nearby hit me up for a match. Willing to travel a couple of hours for a good fun match.

I wrestled Chuck twice several years ago for many hours each time. He is a non-stop energizer bunny and a great host. If you want a good mat workout, give him a shout if you are in his area.

matguyKY is recommended by Grants47

MatguyKY is a great wrestler, uniquely strong for his size, with a great technique for constantly wrapping me up in various submission combo's. Stay away from his legs if you want to survive , his scissors are awesome. Best fig4 body scissors I ever experienced !

Ultimatescissorsjobber is a great jobber. I used holds and moves I didn't even know I knew until I tangled with Ulti…. He can take everything I could dish out. Do not pass up working over this tough guy. If you don't know many holds, he will teach you.

Had a great time wrestling with Matguy. He was fun, intense, and gracious in teaching me some new holds as I continue to get my feet under me. Was nice to talk to before and after the match. Appreciated his responsiveness to messages and promptness in finding a place to meet up. Great guy.

I had a great time wrestling Jclem. He is very strong and has a wing span which seems to have no end. I'm eager and ready to get on the mats with him again soon. Also need to say he is handsome, in very good shape, most importantly has a great personality and a charmer.

MatguyKY is a great guy to wrestle and is surprisingly strong for someone his size. He's very experienced and is a man of a hundred holds! If you get a chance to lock up with him, take him on - you will not regret it. And he's a super nice guy off the mats also.

I have wrestled Kywrestlefun many times over the last couple of years. He is a fun wrestle and getting tougher with every match. After much persuasion he finally joined MF. He is a great friend on and off the mats!

kykramtoad is a great wrestle. He likes it rough and tough and can receive as much as he delivers. This was just the first of many more matches I'm sure.

Long overdue, but wanted to give him his credit! Great match and a great host. We wrestled a nice mix of pro and submission style and I very much remember losing the match as a younger rookie. Looking forward to getting my revenge sometime in the future.

Great guy to wrestle, He is a genuine nice guy with a great streak of competitiveness... hot to wrestle a guy like that. He is a very safe and sane wrestler, great mats and hospitality. If invited to wrestle, take him up on the offer...the experience is well worth it. I want more of him!

This guy was one of my first matches ever and also one of my toughest. It was epic actually and we gave it all. This guy is one tough mother.f...and excellent grappler with lots of resources to do harm grappling.hoping to meet him in the not so distant future to have another epic battle!

I had the opportunity to wrestle Pedro several years ago at a private wrestling event. It was one long incredibly hard fought submission. He brings his A game, and can adjust for any opponent. He wore me out and anyone that knows me knows that doesn't happen often. Do not miss the chance to take him on if he is in your area. I hope to meet up with Pedro again on the mats!

I have had the pleasure of wrestling "MatguyKY" at three different times. Each time was a great experience for me with a very skilled, strong, challenging, fun, and trust-worthy grappler. I had great workouts with MatguyKY and highly recommend him!

If you get a chance to wrestle iowawrestler, I highly recommend you do so. We had a very fun match and was a good workout for us both. I hope he and I have the chance to grapple again.

A-Wrstle-bear is a very fun match and very nice guy to hang with. Already trying to schedule another match with him.

We met and wrestled at OKIE RUMBLE several years ago. Very tough but also a super nice guy. Hope we can meet up again to wrestle soon.

awesome wrestler and a really great guy; don't pass him up!